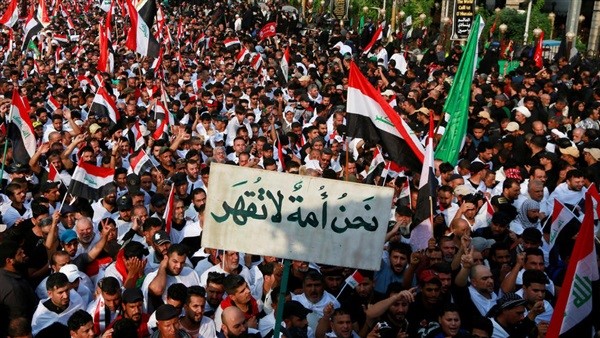 For the ninth day in a row, the Iraqis continued to protest in the capital Baghdad against corruption and the Iranian influence in the country.

Protesters gathered in Tahrir and Al-Sunk squares in central Baghdad, as well as in the southern provinces, where there is a Shia majority. Protestors are demanding political and economic reforms, fighting corruption, and achieving social justice.

Friday’s protests were the largest since former president Saddam Hussein was toppled in 2003.

In the southern province of Basra, three demonstrators were injured and dozens were suffocated after security forces used tear gas to disperse the protest outside the gate of Umm Qasr Port on Saturday morning.

The demonstrators rejected the speech of Iraqi President Barham Saleh last Thursday, in which he announced the acceptance of Prime Minister Adel Abdul Mahdi’s resignation if political blocs offered an appropriate alternative and early elections.

Leader of the parliamentary coalition Fatah, which is the second largest bloc in parliament, Hadi Al-Amiri called for constitutional amendments to resolve the political crisis.

Meanwhile, Ali Sistani, commonly known as Ayatollah Sistani, one of the influential Iranian Twelver Shia marja in Iraq, said that he is monitoring developments on the ground. He reiterated the necessity for reform which must be entrusted to the people and not to anyone else or any regional power.

Moreover, the US Secretary of State Mike Pompeo said the investigation which the Iraqi authorities conducted in mid-October into the violence that accompanied the demonstrations lacked credibility.

Pompeo said in a statement that the United States is closely monitoring the situation in Iraq, calling on the government to respond to the demands of its people.