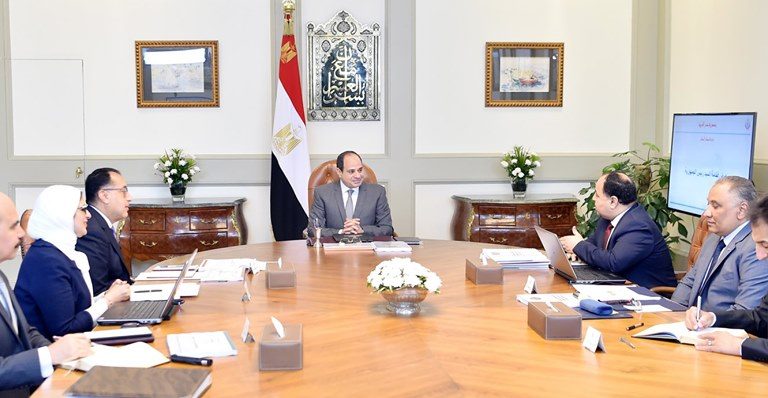 Egypt’s President Abdel Fattah Al-Sisi met on Sunday with Prime Minister Mostafa Madbouly, to follow up on the measures of implementing the comprehensive healthcare insurance system.

The meeting was also attended by Finance Minister Mohamed Moeit, Minister of Health Hala Zayed, and Chairperson of the Administrative Control Authority Sherif Seif El-Din, according to a presidency’s statement.

Under the Universal Health Insurance Law, the new insurance system started its pilot stage in Port Said. Meanwhile, the president called for organising awareness campaigns for citizens over the new system and its measures.

Hala Zayed reviewed the Health Ministry’s recent measures within the experimental stage of the comprehensive healthcare insurance system as well as the efforts to prepare other governorates of the first stage, including Luxor, South Sinai, Ismailia, Suez, and Aswan, for applying the new system.

Zayed added that the ministry plans to develop 246 units and 42 hospitals inside the previous governorates as well as prepare for the development of 30 additional health units to be the infrastructure of the new system in other governorates.

Moreover, she added that about 500 citizens registered in the new insurance system, noting that the ministry is carrying out training programmes to upgrade the qualifications of human cadres.

Meanwhile, Al-Sisi called for starting the new insurance system in South Sinai and Luxor in March 2020.

In a similar context, Zayed reviewed the recent developments of the presidential initiative to eliminate waiting lists for critical surgery cases, explaining that 286 patients had undergone surgeries, costing EGP 1.9bn, so far.

On a different note, Al-Sisi and Mohamed Moeit discussed the measures of the full implementation of the earlier decree of raising the minimum wage across the country.