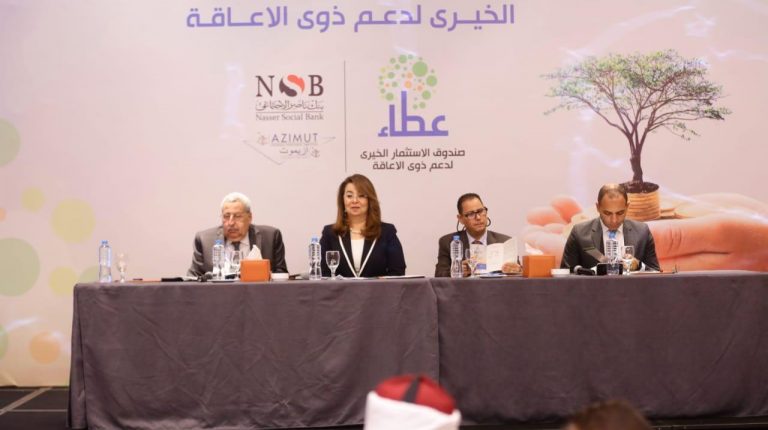 ATAA Charitable Fund for supporting the people with disabilities aims to attract EGP 200m in the first phase of its subscription, Emad Ragheb, chairperson of the fund, said.

On Monday, Minister of Social Solidarity and Chairperson of Nasser Social Bank, Ghada Wali, witnessed the official launch of the subscription.

Wali stressed the importance of providing various aspects of care for people with disabilities. It is indispensable that government efforts join forces with civil society, the private sector, and individuals in financing and supporting these efforts to achieve more integration for Egyptian citizens with disabilities.

She explained that the establishment of the fund was an important non-governmental initiative, and comes in the state’s attention to the issue of persons with disabilities and in response to President Abdel Fataah Al-Sisi’s instructions to provide more support and care for people with disabilities.

The fund is the first of its kind in Egypt, operating in accordance with the capital market legislation and under the supervision of the Financial Regulatory Authority (FRA).

The fund aims to finance bodies, associations, and authorities that provide services for people with disabilities in the areas of health and social services.

For his part, Sherif Farouk, senior vice-chairperson and CEO of Nasser Social Bank and a board member of the fund, said that Azimut has been contracted to manage the fund and achieve the best return, pointing out that the company waived its fees to contribute to the support of the fund’s mission.

He added that the fund will adhere to the highest levels of governance and transparency. The board will issue an annual report on its activities and publish its financial statements. There will be regular meetings to attend the fund’s shareholders and will also establish a website that includes everything related to its charitable and social work.

Ahmed Aboul El-Saad, managing director of Azimut Egypt Asset Management, said that the difference between ATAA Charitable Fund and other investment funds is that the subscriber in the ATAA fund will not receive a return, but will direct its return to support people with disabilities.

He added that the initial capital of the fund is EGP 5m, thus an initial subscription in the fund worth EGP 250m can be reached within days of the opening of the subscription.

He pointed out that it is planned to raise the capital to EGP 20m which will increase the size of the subscription to EGP 1bn.

The fund’s account will be invested in a variety of ways, including fixed income instruments, deposits, treasury bills and bonds, corporate bonds, securitisation and other investment funds, as well as investments in stocks on the Egyptian stock exchange, he said.

According to Mohamed Omran, Chairperson of the Egyptian Financial Supervisory Authority, Ataa Fund is the first charitable investment fund in Egypt.

Omran stressed that such funds are very important to achieve sustainable development in Egypt, expecting that there will be more charity funds in the coming period.

Omran revealed the FRA’s contribution of EGP 10m to the fund.

Omran called on representatives of various companies and organisations to invite their employees to contribute to the fund, announcing his personal participation worth 10,000 securities.

In December 2018, the NSB board approved the establishment of a charity fund to support PWDs with an initial capital of EGP 200m.

President Abdel Fattah Al-Sisi announced that the fund will receive EGP 80m from Tahya Misr Fund, and the Ministry of Endowments will contribute EGP 20m. The Suez Canal Bank will contribute by EGP 5m, in addition to the contribution of NSB by EGP 20m.

Forming a board of directors for the fund was completed. The board is headed by Emad Ragheb, one of the most famous Egyptian accountants and former executive partner of Ernst & Young Egypt.

The establishment of the fund comes within the framework of President Al-Sisi’s announcement that 2018 will be a year for people with special needs and disability in Egypt in light of the state’s efforts to empower and integrate persons with disabilities in the recent period.

According to Farouk, the fund will provide support to universities, schools, andother educational institutions, which are authorised to carry out scientific research, serving people with disabilities in all fields.

The fund will also finance institutions and educational bodies of different stages and levels, and training centres with regard to books, journals, machinery, or equipment, and other supplies necessary for the educational process for people with disabilities.

Azimut Egypt has been contracted to manage funds and securities portfolios as an investment manager of the fund.