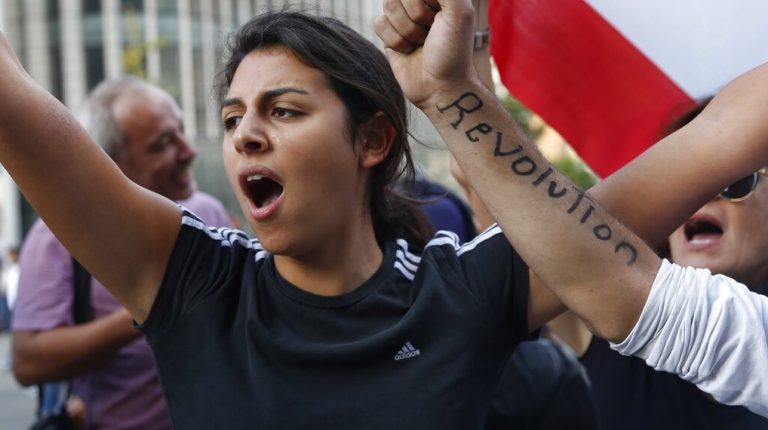 Within just a few days, two prime ministers of Arab countries have been forced to resign following mass protests that erupted against corruption, poor governance, unemployment, and poor public services in these countries.

During October, protesters in Iraq and Lebanon, suffering from similar grievances, shared the same chant that emerged earlier during the uprisings in other Arab in 2011; “The people want to topple the regime.”

Unlike Lebanon, protests in Iraq have been faced by extreme violence, as hundreds were killed, while thousands of demonstrators were wounded over two waves of protesting during the month.

Lebanon’s Prime Minister Saad Al-Hariri finally has acquiesced to the demands of his people,
announcing last Tuesday that he would step down following more than two weeks of unprecedented mass protests that defy deep sectarian divides.

Al-Hariri said in a televised speech that he tried to find a way out, but things reached “a dead end.” He accused Iran of “sowing the strife, devastation, and destruction” not just in Lebanon, but also in Iraq, Syria, Bahrain, and Yemen with aims to “destroy the Arab nations and control them.”

However, Al-Hariri’s resignation was not expected to satisfy the protesters who have been very clear regarding their demands. The demonstrators reacted to the prime minister’s resignation with a new chant “All of them means all of them,” affirming their desire to change the whole power elite. However, this did not prevent them from celebrating the news, chanting: “Revolution, Revolution.”

Meanwhile, Iran-backed Hezbollah leader Hassan Nasrallah announced twice he is rejecting Al-Hariri’s resignation. Last Friday, Nasrallah accused some protesters of “receiving funding from foreign bodies,” for the second time since the start of the movement.

Nasrallah accused some parties, that he did not specify, of planning to spread chaos and “civil war,” but Lebanese people have avoided that scenario, he added.

Before the Lebanese PM’s resignation, mobs loyal to Hezbollah and Amal groups attacked protesters. Photos and videos were circulated on social media showing a mob wielding sticks and pipes to attack terrified protesters, including women, on the streets of the capital Beirut. The mob chanted “Shia, Shia,” while cursing protesters who clashed with them, as the video showed.

On the other hand, the US Secretary of State Mike Pompeo called on Lebanon’s political leaders last Wednesday on Twitter “to urgently facilitate the formation of a new government that can build a stable, prosperous, and secure Lebanon that is responsive to the needs of its citizens and free of endemic corruption.”

More than two weeks ago, hundreds of thousands of protesters took to the streets of Lebanese cities calling for the toppling of Al-Hariri, President Michel Aoun, and Parliament Speaker Nabih Berri.

The furious protests were first sparked following a governmental decree to tax voice calls made through the Facebook-owned app WhatsApp, which the government withdrew, but it escalated to be against the country’s weak economic conditions.

The country of six million people, belonging to various religious communities, has been suffering from a weak economy and has been in a crucial need for reforms and investment.

Following the end of Lebanon’s civil war in 1990, the country expanded in borrowing which worsened the economic conditions and increased socioeconomic inequalities

Lebanon relies on a sectarian political system which is based on a power-sharing agreement. The president has to be a Maronite Christian, the prime minister a Sunni Muslim, and the parliament speaker a Shia. Protesters demand the end of this political system, and to replace it with a secular regime.

Last Friday, Tens of thousands of protesters massed at the Tahrir Square, Baghdad in the second wave of the October protests that swept the capital and other Iraqi cities, including Basra and Karbala in Iraq’s Shia southern region.

Demonstrations have erupted against government corruption, high unemployment, and the shortage of basic services, such as clean water and electricity. Protesters demanded the ouster of Prime Minister Adel Abdul-Mahdi, a 77-year-old Shia Muslim politician who came to power through 2018 elections.

Earlier, Iraqi President Barham Salih announced last Thursday that Abdul-Mahdi agreed to step down if the political blocs agree on “an acceptable replacement to prevent a vacuum.” Salih added that after a new electoral law passed, he would call for early elections.

Protesters welcomed the decision, but still, call for a widespread overhaul of the regime, as protests continued.

But protests have been bloody in Iraq. Security forces and Iran-backed militias fired tear gas and live ammunition against the civilians. Over 264 people have been killed this month since the protests erupted. Around 12,000 others have been wounded, according to the Independent High Commission for Human Rights of Iraq.

Security forces in Baghdad were accused of the use of “two previously-unseen military-style tear gas grenades which have killed at least five protesters in five days, as well as causing horrific injuries to others,” Amnesty International said on Thursday.

“Witnesses have told Amnesty about how the Iraqi anti-riot police switched from using standard hand-thrown tear gas canisters from around 25 October, to using this new type of grenade which has led to a subsequent spike in deaths and injuries,” the rights group said.

“All the evidence points to Iraqi security forces deploying these military-grade grenades against protesters in Baghdad, apparently aiming for their heads or bodies at point-blank range. This has had devastating results, in multiple cases piercing the victims’ skulls, resulting in gruesome wounds and death after the grenades embed inside their heads,” the rights group continued.

Iraq maintains to score among the worst countries on corruption and governance indicators, since the US’s overthrow of Saddam Hussein’s regime, according to Transparency International.

According to the International Labour Organisation, unemployment was about 13% in 2017.

Since the US invasion in 2003, Iraq has struggled to restore stability and security. In 2014, ISIS proclaimed its “Islamic caliphate”, but the Iraqi government formally declared victory over the terrorist group in July 2017.

In Iraq, under informal Muhasasa Ta’ifia system (sectarian apportionment system), the president is a Kurd, the prime minister a Shia, and the parliament speaker a Sunni.