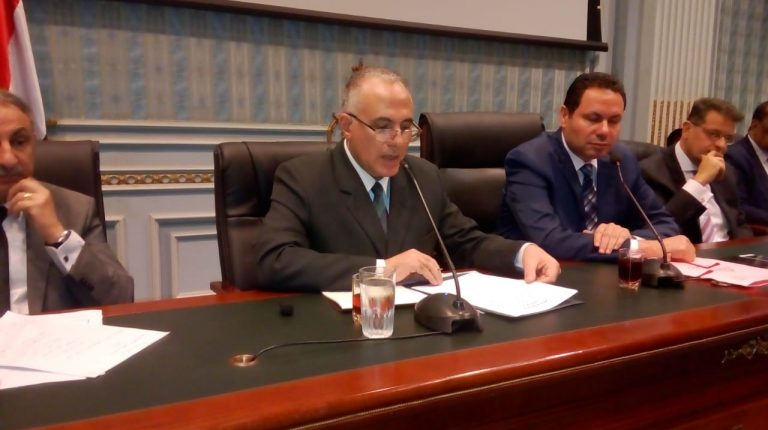 The agriculture, irrigation and food security committee in the House of Representatives approved on Monday the new draft law of water resources and irrigation, in preparation for submission to the plenary session of the House for discussion.

During his speech before the committee, Minister of Water Resources and Irrigation, Mohamed Abdel Aty, said the new draft law is considered a cornerstone for overcoming water challenges in Egypt in light of the increasing demand for clean water.

Abdel Aty pointed out that the draft law aims to ease bureaucracy in the ministry’s various bodies, and modify some service fees, especially for low-consumption users.

The new draft law includes setting rules on the groundwater use in desert areas to ensure the sustainability of the aquifer to meet the sustainable development needs of national projects. It also includes new procedures to regulate river traffic, marinas, and floats, and also introduced new articles to regulate the process of dealing with floods whiletightening penalties in dealing with crimes of trespassing on floods.

AbdelAty added that the draft law aims to emphasise the need to tighten the necessary procedures to preserve the Nile River, public waterways, irrigation and drainage facilities and networks, and activate and tighten the means and tools of such procedures.

It also comes to encourage the concept of participation through the participation of users and water users with the ministry of management, operation, and maintenance of parts of irrigation and drainage facilities through forming associations to gather the water users.

He stressed the importance of ensuring the articles of the draft law are clear and specific, especially with regard to determining the responsibilities of the various parties such as ministries and government agencies and the role of each in the implementation of the law after its adoption, in order to reduce conflicts of competence or the spread of responsibility, as well as to care and preserve state property.

The minister attributed the importance of the draft law at that time ofthe emergence of a number of variables and challenges not addressed by the current irrigation and drainage law No.12 of 1984, which dates back more than 35 years.

According to the minister, since the 1984 law was adopted, all the data related to the demand for water changed towards increasing demand with steady resources. In addition, the per capita share of water has been declining due to the steady increase in Egypt’s share of the Nile since 1959 and the stable population increase.

There are also some changes that should be considered in the new law, including the change inwater consumption pattern due to the high standard of living, and the high pollution of surface and groundwater as a result of the steady increase in population activities.

He pointed also to the need to manage part of the growing water needs by expanding the reuse of agricultural wastewater, treated wastewater, industrial wastewater, and use of groundwater with specific controls to ensure that aquifers are not depleted, or the quality of these water is changed, or by utilising rainwater, floods, and desalinated water.

Abdel Aty added further that the draft law seeks to develop some articles and provisions to address and reduce the negative effects of some phenomena and variables that have occurred in the water resources system. It also emphasises the importance of the optimal use of public property related to water resources and irrigation, and address some of the gaps and legal complexities that have emerged through the implementation of the current law.

Death sentences for Brotherhood members are pending, will not be carried out in this collective manner: Amr Moussa

Hopes fade for an inclusive government

A closer look at Qandil’s cabinet