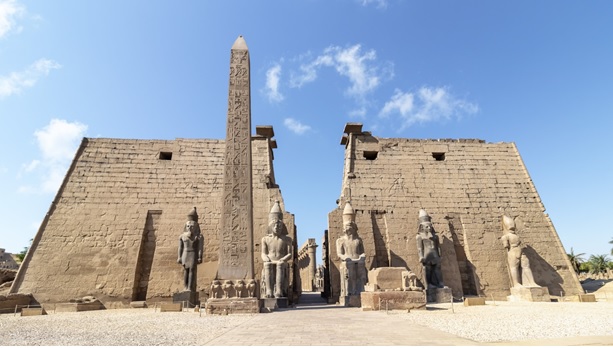 Egypt is a country with a rich, ancient history. Whether you are into archeology or simply just fascinated by old structures that have withstood the test of time, then Egypt should definitely be on your bucket list. Egypt has so much to offer in terms of incredible sights to witness. Even though the elements have tried to hide the massive structures built by the rulers of Egypt, archeologists have worked tirelessly to find them and share them with the world. Egypt has numerous temples, complexes, pyramids, and ancient markets to explore. While everyone knows about the Valley of Kings and the Pyramids of Giza, there are several other incredible things to check out. Here’s a list of the most amazing sights to see when visiting Egypt.

Often referred to as the Hanging Church, this Coptic Christian Church gives an impression of being suspended in midair. Built in the 7th century, with extensive restoration in the 10th century, the church is sure to several apparitions of Mary. There are 29 steps leading into the church. Its main features include a timber roof resembling Noah’s ark and an incredible marble stone pulpit with 13 marble columns representing Jesus and his 12 disciples, one is which is black indicating the betrayal of Judas and another gray representing Thomas’ doubt of the resurrection.

Mortuary Temple of Seti I

Unlike other temples, the Mortuary Temple of Seti I is an L-shaped structure. It has seven great doorways dedicated to Amun-Ra, Horus, Isis, Osiris, Ptah, Ra-Horakhty, and Seti I. The limestone structure is filled with reliefs, sandstone papyrus columns, and friezes. There are also numerous figures of Seti I, Ramses II, and other earlier pharaohs. While the temple was started by Seti I himself towards the end of his reign and completed by his son, Ramses II. While most of this temple complex is in ruins, you can still visit the temple and observe the numerous statues, architecture, and hieroglyphs.

This is one of the last temples built using classical Egyptian architecture. It was constructed in 690 BC. It was constructed to honor the goddess Isis, the complex is home to two pylons, and a birth house. These pylons have numerous reliefs depicting different scenes with the goddess, her son Horus, and other gods. The Temple of Isis was also taken over and used as a Christian church. This resulted in crosses being carved into older hieroglyph reliefs and Egyptian gods defaced. Interestingly, this temple is not in its original location. Originally, the temple was located on Philae Island, but due to flooding, a Unesco team relocated the temple to Agilkia Island and you can check out Lyhpa for more information.

Constructed between 1274 and 1244 BC, the Great Temple of Ramses is a huge temple dedicated to Amun, Ptah, and Ra-Horakhty. Over time, sands and the Nile river hid this temple from the world. It was rediscovered in 1813. The temple is carved out of a mountain and is guarded by four massive statues of Ramses II. There are numerous statues in the temple, as well as paintings and reliefs. The temple is designed in such a way that on February 21 (Ramses II birthday) and October 21 (Ramses II coronation day) the sun shines into the temple illuminating the statues of Amun, Ra-Horakhty, and Ramses II in the hypostyle hall. However, the temple was moved and this phenomenon now occurs one day later.

This complex, covering 2 sq. km, is filled with numerous kiosks, pylons, obelisks, and sanctuaries dedicated to the Theban triad and other pharaohs. The main temple of the complex is the Temple of Amun. This complex was one of the most important places to worship in Egypt during the New Kingdom. It is also one of the world’s largest religious complexes. The structures in the Karnak Temple Complex were constructed between 1570 and 1090 BC. As pharaohs kept building new structures at the site the complex grew over time. Therefore, the further into the complex you go, the older the buildings and structures you will see.

Constructed in 1400 BC, the Luxor Temple is again a series of structures in a complex. The initial structure was an expansion of an existing shrine. It was intended to be the private quarters for the god. This was then further expanded by Ramses II, Tutankhamun, Alexander the Great and others. The fort that surrounds the temple was built by the Romans. Eventually, people started living inside the complex, which is why the complex is in the middle of the city of Luxor. Like other temple complexes in Egypt, the further in you go, the older the structures are. Structures found in the complex include pylons, shrines, halls, and sanctuaries filled with statues and reliefs of all kinds.