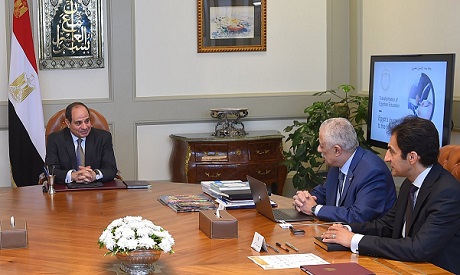 In his meeting with Minister of Education, Al-Sisi directed Shawki to continue his efforts to complete  a comprehensive plan to develop the education system in Egypt and enhance students’ level of knowledge throughout all education levels, even after their graduation. In addition, he urged the ministry to find the means to unleash the Egyptian students’ potentials and talents.

The meeting also reviewed the recent efforts made by the Ministry of Education to get a comprehensive and integrated system for the basic education stage in Egypt.

Shawki also reviewed efforts by the Egyptian Knowledge Bank (EKB) to improve the content provided for all students of all ages as well as enabling its services for Arab and African students. He added that Egypt will benefit from international expertise in the field of education to accelerate educational development.

In addition, he went through the results of establishing Japanese schools in Egypt, highlighting that the ministry has recently appointed 15 Japanese specialists to be supervisors and managers at Japanese schools distributed nationwide, to ensure sustained and stable education quality based on Japanese standards.

In another meeting with Al-Gazzar, Al-Sisi demanded the government to meet the deadlines set for the ongoing urban development projects nationwide within the highest quality standards.

The meeting focused on the housing ministry’s plans and projects in several new urban communities under construction, topped by the New Administrative Capital (NAC).

Al-Gazzar filled the president in with the latest progress in the new capital’s Green River project and Central Business District, as well as on other urban development projects, including New Mansoura City, New Aswan City, and New Alamein City.

The minister tackled the latest developments on an urban development plan to revive historic Cairo, including the demolition of the Maspero Triangle slums and the Magra El-Oyoun Wall. He also reviewed the outcome of Egypt’s recent participation in the 10th World Congress of the Council on Tall Buildings and Urban Habitat, at which the minister showcased the designs and building progress of the towers under construction in the NAC.