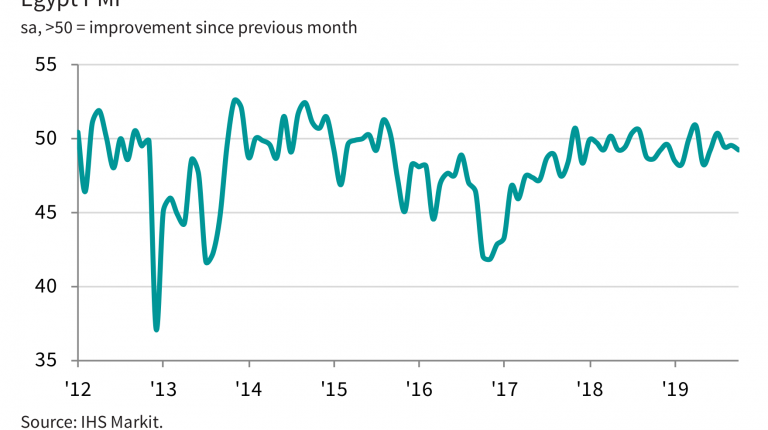 Egypt’s PMI slightly declined from 49.5 in September to 49.2. The decline is the third in a row, however, the reading was stronger than the average for the series.

David Owen, an economist at IHS Markit, said, “The headline PMI dropped slightly to 49.2 in October which, whilst signalling a marginal deterioration in operating conditions, was still above the series average of 48.4, and thus pointed to a softer decline than usual.”

The report states that new orders declined for the third-month running with failing output. On the other hand, selling charges increased, but only slightly as some companies offered discounts to drive up sales.

The report also indicates that firms mentioned that weak employment levels in the economy had hampered demand. This was highlighted by a trend of declining payroll numbers earlier this year. Egyptian businesses have expanded their workforces in each of the past three months, although rates of growth were marginal.

Moreover, the pace of decline quickened from September, with survey participants reporting that lower sales and liquidity problems led to the overall reduction.

Meanwhile, demand conditions in the non-oil private sector remained subdued, as companies referred to the lack of new contracts during October. The rate at which new orders fell was the fastest since May, albeit still relatively modest.

According to Owen, “Sales dropped for the third successive month, with new orders from abroad also sliding into contraction territory. Firms noted that market conditions were weak at present, leading to a reduction in the number of new contracts. Labour market conditions have reportedly been slow, although continued hiring activity among surveyed firms suggests a possible improvement in the future.”

On the price front, a drop in new orders encouraged Egyptian firms to keep output charge inflation to a minimal, with prices rising to the least extent for four months. Several

businesses reduced their fees to attract new customers. However, this was offset by other firms raising prices due to higher cost burdens.

Meanwhile, input cost inflation dropped to the weakest since June. Increases rose from a sharp rise in salaries, often related to higher living costs. On the flip side, purchase prices grew at a

softer pace, as higher bills and customs fees were offset by lower raw material prices and an improvement in the exchange rate against the US dollar.

Remarkably, the level of business sentiment jumped from September’s near three-year low, with 48% of panellists expecting activity to rise over the coming 12 months. Despite lower current sales, firms were hopeful of future contracts leading to a rebound in activity.

“Moreover, after falling to a near three-year low in September, the forward-looking business outlook improved greatly during October, signalling regained hopes of stronger market activity in the months ahead,” Owen concluded.