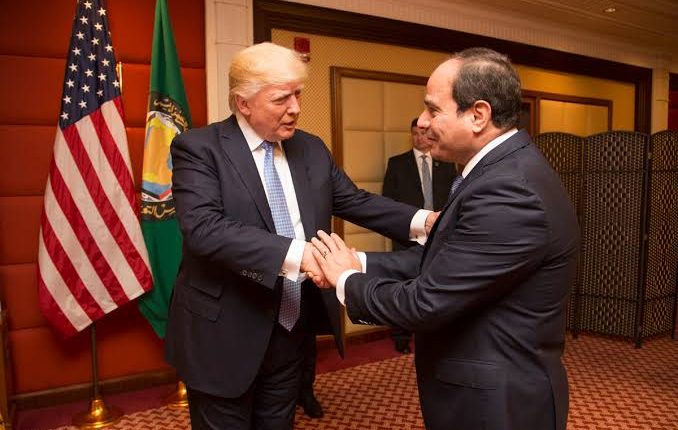 The US President Donald Trump has voiced his support to the ongoing negotiations between Egypt, Ethiopia, and Sudan over the Grand Ethiopian Renaissance Dam (GERD) to reach a collaborative agreement, according to two statements of the White House and Egyptian presidency on Monday.

Trump spoke with Egypt’s President Abdel Fattah Al-Sisi and asserted that he will make the negotiations a success, the Presidency’s spokesperson Bassam Rady said.

“President Trump said that he will receive the foreign ministers of the three countries (Egypt, Ethiopia, Sudan) in the Oval Office at the onset of the negotiations, emphasizing his keenness to make the results of this negotiations positive and fair and to maintain the rights of all parties,” Rady added.

In a separate tweet on Monday, Al-Sisi renewed his gratitude to Trump’s efforts to sponsor this tripartite negotiation over the GERD.

“I assure my full confidence to this generous auspice which would lead to a consensual path that takes into account the rights of all parties within the framework of International Law and humanitarian justice,” Al-Sisi wrote.

Egypt Foreign Minister Sameh Shoukry headed to Washington on Sunday to attend a meeting aimed at solving the dispute over the GERD.

The meeting comes upon an invitation of the US administration last month to the three foreign ministers as Egypt seeks an international mediation to reach a fair binding legal agreement that protects its water rights in the Nile river.

Ethiopia and Sudan announced on Friday that they will take part in the meeting in Washington which is scheduled to be held on Wednesday.

The meeting is expected to involve the US Secretary of State, US Secretary of Treasury, as well as foreign and irrigation ministers of Egypt, Ethiopia, Sudan and the World Bank President David Malpass.

Egypt depends on the Nile River for more than about 70% of its water, in drinking water, industry, and agriculture. Egypt is concerned that the GERD will shrink its share of Nile water and cause “harms” to its people.

Egypt’s water share of the Nile is about 55bn cubic metres (cm), while its water needs reach 59bn cm.

Through the GERD, Ethiopia seeks to be the largest hydropower project in Africa. About 70% of the dam has already been constructed and is expected to generate more than 6,000MW by 2021.