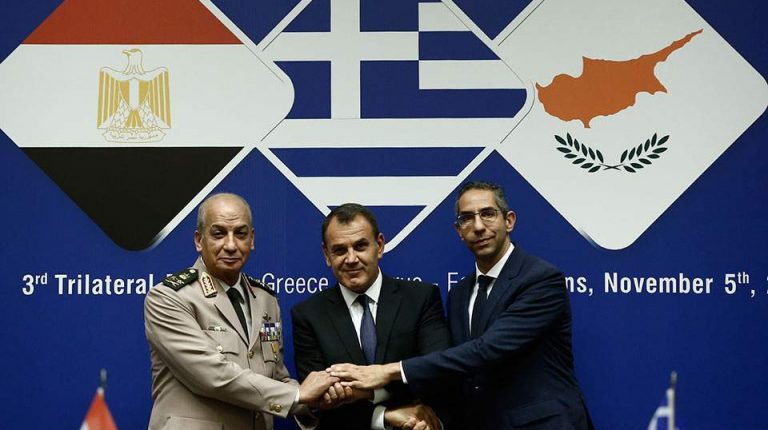 Through a tripartite meeting held on Tuesday between the three defence ministers in Greece, they signed a document that condemned the Turkish assault both in the Cypriot exclusive economic zone (EEZ) and Syrian territories.

According to Cyprus News Agency, the Cypriot Defence Minister Savvas Angelides said during the meeting that Turkey’s illegal measures in Cyprus’ EEZ in the Mediterranean Sea, violates the sovereign rights of his country and the international law.

In the same context, Angelidis expressed his country’s gratitude towards Greece and Egypt for their strong support to efforts to resolve the Cyprus problem.

He announced that the next tripartite summit on regional security cooperation will be held in Cyprus in 2020.

“The tripartite cooperation between our countries on defence and security will be strengthened in 2020, which shows that regional cooperation enhances security and protects us from illegal and terrorist acts,” Angelidis said.

The statement called on Turkey to “immediately cease such acts and respect the sovereign rights of the Republic of Cyprus in its maritime areas, as defined by international law and the United Nations Convention on the Law of the Sea,” according to the Cyprus News Agency.

According to a maritime warning issued by Turkey, the Turkish drilling vessel “Yavuz”, which returned to the maritime zone of Cyprus in the Mediterranean Sea will carry out excavations inside area 7 off the southwest coast of Cyprus, and that the government of Cyprus has granted a license to the French company Total and Italian company Eni to conduct its exploration, the Turkish statement claimed.

The Council of Foreign Affairs of the European Union agreed on 14 October to establish a framework of restrictive measures that targets persons and officials involved in the illegal activities of hydrocarbons in the Eastern Mediterranean, and requested the High Representative and the Commission to make prompt proposals on this purpose.

At its meeting on 17 and 18 October, the Council of Europe also endorsed the conclusions of the EU Foreign Affairs Council on Turkey’s illegal digging activities in the Cyprus’ EEZ, and reaffirmed its solidarity with Cyprus, adding that the matter was under follow-up.