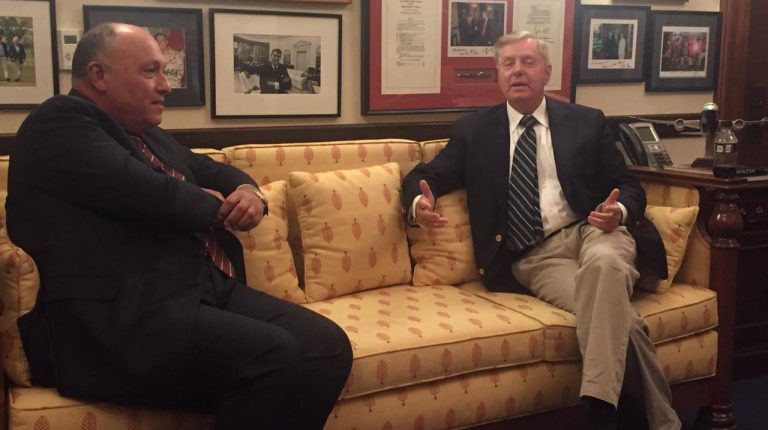 Egypt’s Foreign Minister Sameh Shoukry met with a number of US congressmen including Chair of the Senate Committee on the Judiciary Lindsey Graham, and White House Senior Advisor Jared Kushner, before the mediation meeting on the Grand Ethiopian Renaissance Dam (GERD).

In his meeting with Graham, Shoukry reviewed the latest regional developments and Egypt’s vision on means of handling the Middle East crises.

The talks also tackled the importance of continued US support for Egypt to be able to confront security, political, economic, and social challenges. He also spoke about Egypt’s efforts to ensure stability in the region, including its confrontation of the “Turkish role in destabilising the region”.

The talks also tackled the GERD and the Egyptian efforts to reach a deal, taking into consideration the interests of all parties.

Shoukry arrived in Washington D.C. to take part in mediation talks on Wednesday between Egypt, Ethiopia, and Sudan to break the current deadlock in negotiations over the GERD.

In another meeting with Kushner, the minister discussed the reasons behind the delay of the GERD agreement, owing to “ the unresponsiveness from the Ethiopian side”.

According to an official statement by the Egyptian foreign ministry, Shoukry, reviewed with Kushner the Egyptian efforts since 2014 to reach a fair agreement that achieves the interests of three three countries.

Ethiopia, Egypt, and Sudan have accepted a US invitation to discuss breaking the deadlock in negotiations over the GERD, which has been the source of a deepening spat between Cairo and Addis Ababa in recent months.

The meeting between Shoukry and Kushner also included discussions on a number of regional issues of bilateral interests, including the Palestinian cause, peaceful resolutions for the Libyan and Syrian crises, and the necessity of putting an end to “Turkey’s destructive role in the region” and ending its “illegitimate occupation of parts in northern Syria”, according to a statement by the foreign ministry.

Moreover, Shoukry also met on Tuesday with US Senator John Anthony Barrasso and discussed cooperation and relation with his country and other regional efforts.