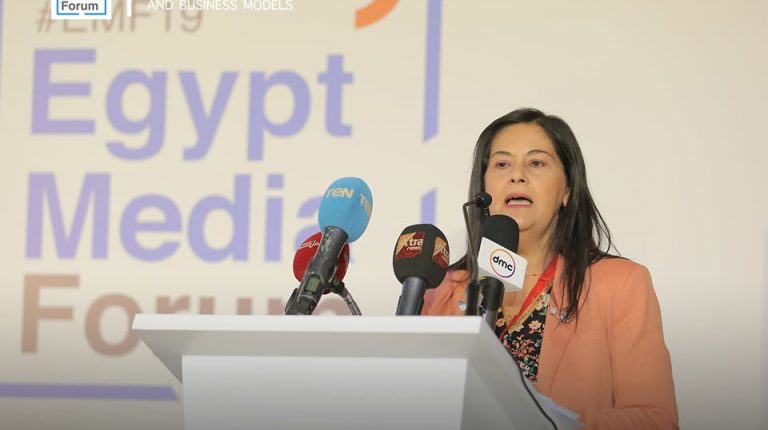 “Good journalism is always a goal we all seek. The biggest issue is how to maintain good press services in light of the many challenges we face,” said Howaida Mostafa, the dean of Faculty of Mass Communication at Cairo University, in an opening session of the second edition of Egypt Media Forum (EMF) 2019 on Sunday.

The EMF is an annual professional event for Egyptian journalists, allowing them to see the developments of the media industry in the world, and to learn about the latest methods of producing and displaying content in the media.

The forum showcases successful experiences of Egyptian, Arab, and international content production organisations that have dealt with digital developments.

According to Mostafa, there are basic standards that will always judge the quality of the press service offered, which includes simplicity, portability of performance evolution, and appropriateness to the public.

“We should adhere to those standards as the media has a great role in the enlightenment of the community by focusing in on its vital issues in a way that is unbiased and balanced,” she continued.

The dean added that there must be depth in dealing with issues, because the public is waiting for analysis, interpretation, and field service in a stressful environment in which the journalist works, especially in the presence of a strong rival, the citizen.

She also said that social networking sites are important and influential but have standards and frameworks that people must know how to deal with, pointing out that the accuracy is a basic determinant of journalistic work, an element that social media fails to advertise.

“The quality of information and objectivity were key to survival, and diversity was a fundamental value to compel the reader to continue on the site,” she asserted.

During the first session which tackled challenges of quality journalism, veteran journalist Abdullah Al-Sannawi said Media in Egypt is not keeping pace with developments in the field, noting that they do not offer anything new and do not meet basic standards. 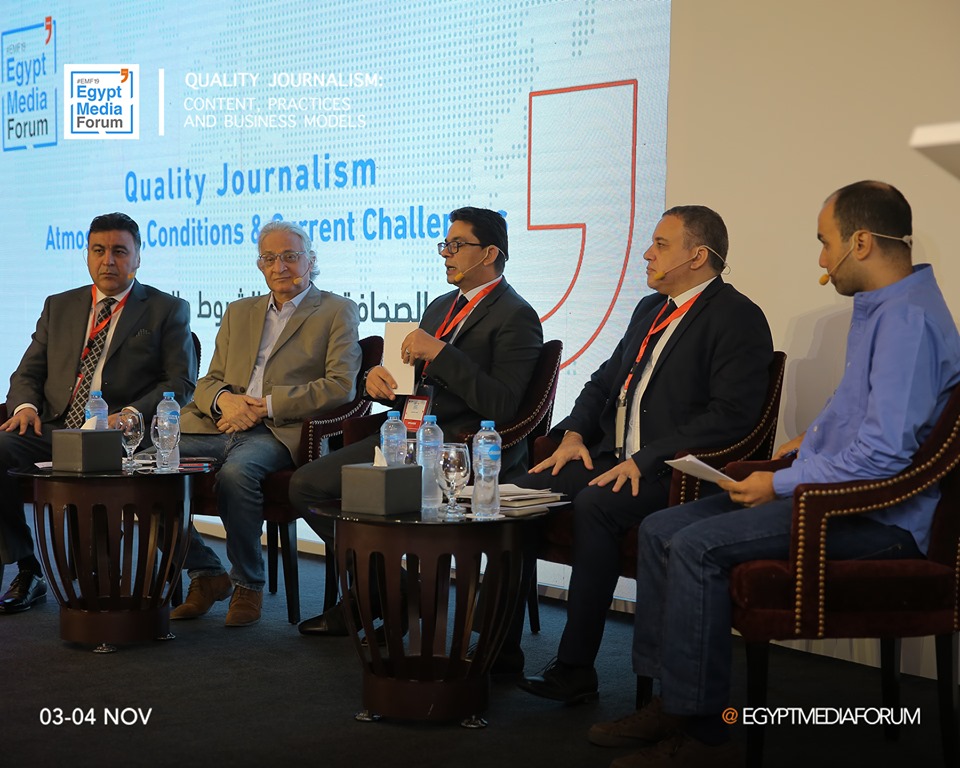 Along with media Professor Yasser Abdel Aziz, Editor in Chief of Ahram Ezzat Ibrahim, and Journalist Ahmed Samir, El-Sannawi discussed the quality of press in Egypt, performance of journalists, content, and qualification of the leader.

The forum also discussed good journalism that adheres to information and abstract facts and investigates accuracy and truth.

It also provided workshops on ways for journalists to develop quality, know the legal conditions of different coverages, understand the impact of photojournalism, in addition to an in-depth discussion of investigative and conflict journalism.

EMF launched the first edition of October 2018 under the title of “the post-information era”, in the presence of more than 600 journalists and media, and came in partnership with several major Egyptian and international media, including the Masrawy news site, and several television channels.

“Newspapers now are working randomly, with no teacher, no determined journalism as before, and there is a big quality problem,” was Al-Sannawi’s answer to a question about the status of journalism and media in Egypt.

He explained that the press lost its basic services after the decline in quality, the absence of press analysis, and live in depth coverages of events.

“There is a restriction in press freedoms, and we have become a notorious profession” he added.

The press in Egypt has nothing to do with good journalism. It no longer provides services to the reader, creating a gap between newspapers and the reader.

“The situation of the press in Egypt misses role models, newspapers no longer have a character, which is a major reason for the lack of distribution of newspapers,” he said, adding that the level of services provided by news outlets is weak due to the lack of journalists’ training.

As the forum is organised by the Danish Egyptian Dialogue Institute (DEDI), he also said that the Egyptian and Danish press is not good at all, pointing out that both are suffering similar challenges. 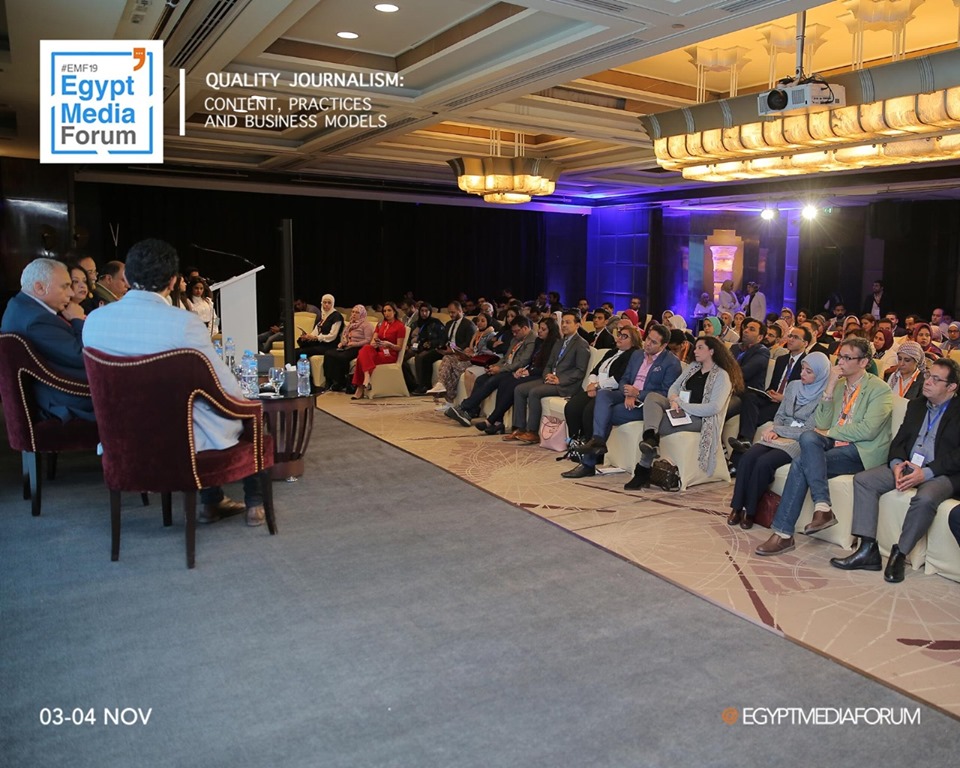 He added that journalism in Egypt lost the excitement of reading, stating that he goes through various newspapers daily for 15 minutes and always finds poor coverage.

In the early seventies, the number of issues produced by Al-Ahram newspaper on Friday could only reach one million copies, which nowadays do not amount to one-third of printed issues, elaborated Al-Sannawi, justifying this with the poor quality of journalism.

He concluded that newspapers are now repeating the same information, instead of providing education or informing, leading to a systematic destruction of the profession.

Moreover, Abdel Aziz stated the solution lies in Egypt’s constitutional vision to organise the work of the press. “If we applied to the legislative aspects, all would be good, although laws are still made hastily,” he added.

According to Abdel Aziz, some of the laws do not comply with constitutional entitlements of 2014 which were prepared in a hurry.

The law regulating the press was issued and amended in a short time, and even this amendment is not applied yet despite its issuance in 2018, he continued.

“The concept of good journalism has standards, and confidence rates have dropped from 42% to 39% in the Arab press, according to a poll conducted that included 7000 people, including Egyptians in 2017 and 2018. Also, half of the Arab respondents believe that political news is wrong,” he added.

Abdel-Aziz said, “Freedom is not the only condition to ensure good press.”

Furthermore, Samir said that the majority of the public suffers from a lack of confidence in the press and the media a long time ago, stressing the need to present the views of different parties in the press to provide good content and win the trust of the recipients.

On that note, he illustrated that sometimes citizens may resort to other invalid means to get the information, which he does not consider a mistake since the reader has the right to know.

Meanwhile, Ibrahim noted that there’s now a fear of the press’s extinction in general, and not just the paper press, during the expansion of the role of social media.

He explained that this struggle is normal since social media acquired more attractiveness to advertisers.

“There is a decline in professionalism and people are exposed to more restrictions, pointing out that everyone complains about the content, but providing solutions is rare,” he added.

He stressed the need to provide more good content. “Without this, we will not develop progress, especially since the reader is looking for good content, and therefore we see higher news follow-up to sites outside Egypt,” he added.