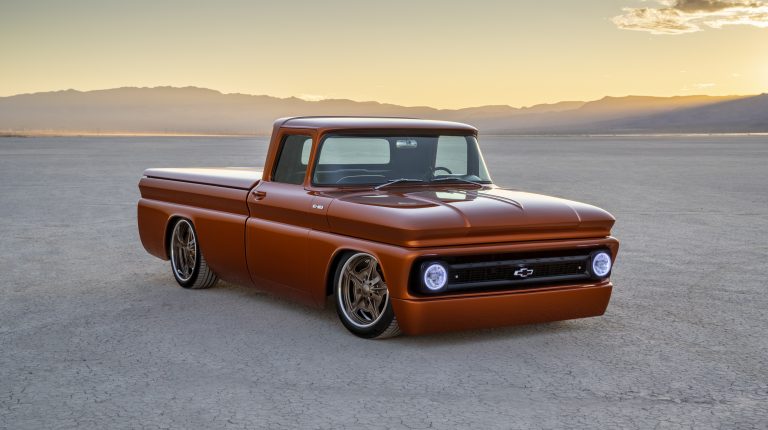 “The Chevrolet E-10 electrified Connect & Cruise concept system reimagines the performance crate engine for hot rodders,” said Jim Campbell, vice president of Performance and Motorsports. “As General Motors continues to work toward our vision of a zero-emissions world, concepts such as this help us get there, while still supporting the enthusiasts who love to drive vintage vehicles.”

The E-10’s Connect & Cruise concept propulsion system is composed of a double stack of Chevrolet Performance concept electric crate motors (eCrate), two 400-volt batteries and a conventional automatic transmission. The double-stack eCrate motor replaces the truck’s original gas engine under the hood and is connected to the automatic transmission, which transfers torque to the rear axle. Power to the drive stack comes from the pair of independent Chevrolet Bolt EV power electronics and two production Bolt EV battery packs. Mounted in the truck’s bed, each offers 60 kWh of usable energy under a hard tonneau cover.

With an estimated 450 horsepower to the rear wheels, the concept electric propulsion system helps the E-10 deliver 0-60 mph times of around 5 seconds; and quarter-mile times in the high 13-second range.

To fit in with other hot rods on the road, the E-10 has a sound emulator complete with three speakers to simulate an induction sound in the front and two banks of a V8 engine in the back of the vehicle. The driver can select one of five modes on the emulator, including LS7 Z28 track tuning, LS7 Z28 touring turning, a V8 engine, a futuristic sound or silent – and the sounds will automatically adjust to the changing of the gears, truly mimicking an internal combustion engine.