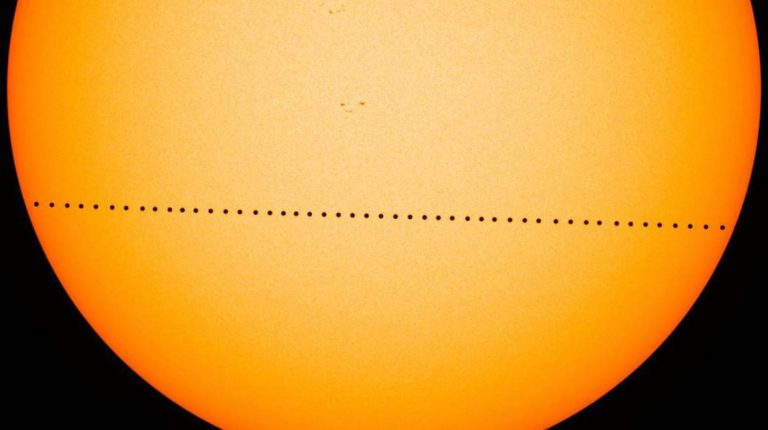 Mercury will transit across the Sun on Monday, for the first time since 2016, in an event that will not occur again until 2032.

Mercury, the smallest planet in our solar system – excluding Pluto which lost its planetary status – is a rocky, crater-ridden, atmosphere-less uninhabitable planet with temperatures ranging from 427C in the morning to -173C at night.

Because Mecury is the smallest planet in the solar system — a third the size of Earth, 1-200th the size of the sun — and will pass in front of the sun, it is recommended that observers use serious optics with solar filters.

Mercury’s transit phenomenon begins at 2:30 pm Cairo time. Mercury is on the left edge of the Sun’s disk and will continue its path until 5 pm.

Gad Mohamed El-Qady, head of the National Research Institute of Astronomy and Geophysics, said that people will need a solar telescope to observe this phenomenon, such as the one available in Helwan Observatory. He added that the observatory will be open for the public interested in astronomy and want to watch the phenomenon.

Only two planets can be seen in transit from Earth, Mercury, and Venus. Transits of Mercury happen 13 times in a century. While, the transit of Venus happens only twice in a century, in an eight-year interval. The last two happened in 2004 and 2012, thus, the next ones will be in 2117 and 2125.