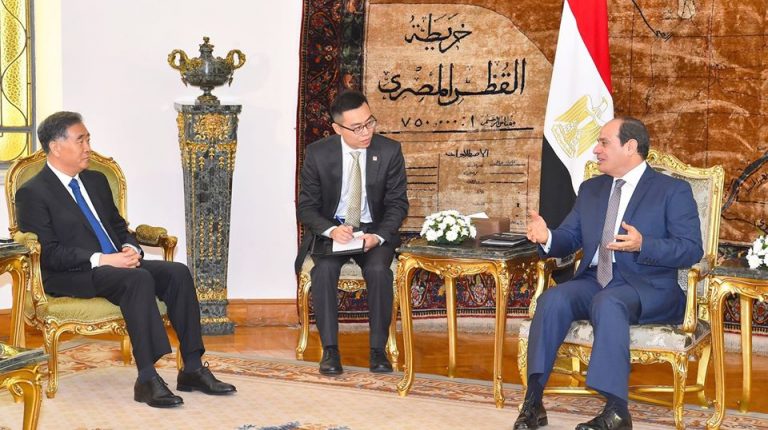 The 50 plus member-delegation is visiting Egypt from 10 to 12 November to discuss boosting cooperation between the two countries via meeting several senior officials including Prime Minister Mostafa Madbouly, parliament Speaker Ali Abdel Aal, in addition to Chinese business community leaders, the source added.

In April 2019, Al-Sisi paid his sixth visit to China, proving the depth of relations between the two countries. The announcement came in 2014 showing elevating Egypt-China relations to the level of comprehensive strategic partnership which they agreed to implement through a five-year executive programme launched in 2016.

The Chinese delegation also visited Huawei headquarters at Smart Village on Monday morning, the source mentioned, adding that the president met with Huawei’s rotating chairperson Guo Ping and Huawei’s President of Huawei Hutchinson Global account and former CEO Huawei Egypt Terry Liu on 3 March 2018 where the president called on the company to promote its investments in the local market.

The president encouraged Huawei to continue sharing technology expertise with Egypt in order to develop the skills of Egyptian youth as they are one of the key engines for the nation’s progress, the source noted.

Responding to the president’s calls, Huawei launched an initiative through a comprehensive programme for developing the skills of the Egyptian youth and connecting them to the labour market in November, the source asserted.

Founded in 1987, Huawei is a leading global provider of information and communications technology (ICT) infrastructure and smart devices, a document received from Huawei company stated. “We are committed to bringing digital to every person, home, and organisation for a fully connected, intelligent world,” the statement added.

Huawei has nearly 194,000 employees, and operates in more than 170 countries and regions, serving more than three billion people around the world.

Huawei’s end-to-end portfolio of products, solutions, and services are both competitive and secure, according to the document, noting that through open collaboration with ecosystem partners, Huawei creates lasting values for its customers, working to empower people, enrich home life, and inspire innovation in organisations of all shapes and sizes.

“At Huawei, innovation focuses on customer needs. We invest heavily in basic research, concentrating on technological breakthroughs that drive the world forward,” the document mentioned.

Huawei began its business in Egypt in 1999 which affirms the company’s confidence in the Egyptian market as one of the strategic markets, the document stated. It added that the company is keen on boosting its investments in the local market and providing value to the telecommunication sector.

The company considers itself as a strategic partner for the Egyptian government and is committed to transfer global technology into the market, the document added.

Huawei has implemented several strategic projects in Egypt in various fields including setting a strategic cooperation with all mobile companies in terms of development, construction, and maintenance of networks and infrastructure.

Huawei’s projects included most landline and mobile access networks which are available for Telecom Egypt, mobile networks for Orange, Vodafone, and Etisalat Egypt.

The company also has a strategic cooperation with Egypt in the construction of strategic mobile networks and 4G network, the document said. “Huawei enjoys a good relations with the Ministry of Electricity and Renewable Energy to import smart meters and transform Egypt’s electricity network to a smart one,” the statement read.