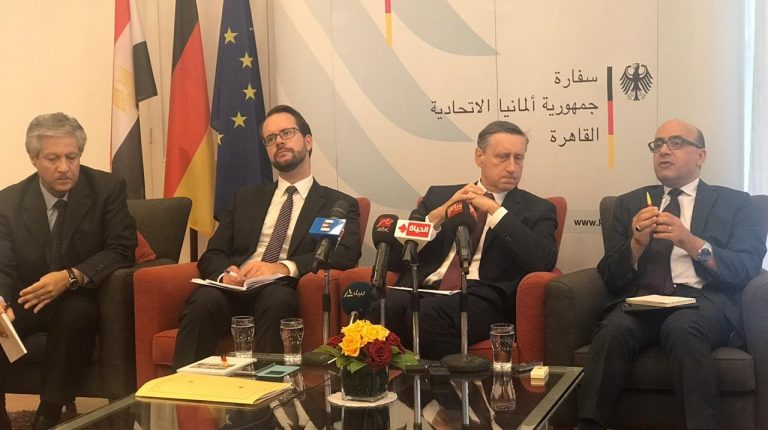 Egypt’s Minister of Investment and International Cooperation, Sahar Nasr, is set to sign a development agreement with Germany, on the sidelines of President Abdel Fattah Al-Sisi’s visit to Berlin next week, according to German Ambassador to Egypt Cyrill Nunn.

Nunn said that President Al-Sisi will visit Germany to attend the G20 Compact with Africa on 19-20 November.

After a press conference held by the German embassy, Nunn said Al-Sisi’s participation comes in light of Egypt’s presidency of the African Union, in addition to the country’s indispensable partnership.

He revealed that a €154m worth development agreement will be signed during the visit in the fields of new and renewable energy, energy efficiency, water, solid waste management, and technical education.

The ambassador added that the cooperation funds between Egypt and Germany have reached €1.7bn and will be increased in the coming period, pointing out that 1,183 German companies are operating in the Egyptian market including 175,000 employees.

He added that the number of German tourists to Egypt during the current year is greater than last year, which recorded about 1.8 million tourists, pointing out that German tourists make up the largest European tourist group visiting Egypt.

He explained that German companies are showing great interest in identifying investment opportunities in Egypt, especially after the economic reform measures taken on by the Egyptian government.

The German ambassador to Egypt explained that the tourism sector is one of the most important sectors for the Egyptian economy, pointing out that Lufthansa Group is flying about 60 full-fledged flights a week.

Nunn further revealed that the debt swap programme amounted to €240m, distributed over three tranches, first one having been completed and the second close to completion, amounting to €80m. The third tranche is currently being negotiated.

In a related context, Nunn said that there are 25 schools in Egypt that are currently applying the German education system, meanwhile, the German Development Bank (KfW) has built about 900 schools in Egypt, admitting about 435,000 Egyptian students with future plans to increase.

Germany is also planning to open a branch of the German International University of Applied Sciences (GIU AS) in the New Administrative Capital during the coming period, he concluded.