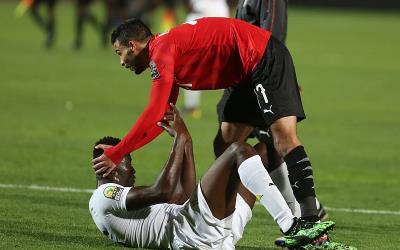 Egyptian football fans spent a pleasant night on Monday with as the Olympic national team clinched a last-minute victory against Ghana securing a place in the U-23 Africa Cup of Nations’ (AFCON) semi-finals.

Ramadan Sobhy and his teammates managed to turn the table and defeated Ghana 3-2, raising their points to six so Egypt qualified to the next stage regardless the result of their next game against Cameroon on Thursday. Hence, the national team is a step closer to the Tokyo Olympics 2020.

This victory brought to mind Egypt’s previous long dominance of the African football as they won three consecutive continental titles in 2006, 2008, and 2010. The Olympic team is now close from make a similar achievement.

Shawky Gharib, the Egyptian Olympic team’s coach, expressed his indescribable happiness to beat Ghana and qualify to the semi-finals, thanking all the players and fans who supported the team until the last minute of the game.

On Tuesday, the Olympic team trained at the Petro Sport Stadium preparing for the Cameroon match. Gharib urged players to stay focused during the upcoming match.