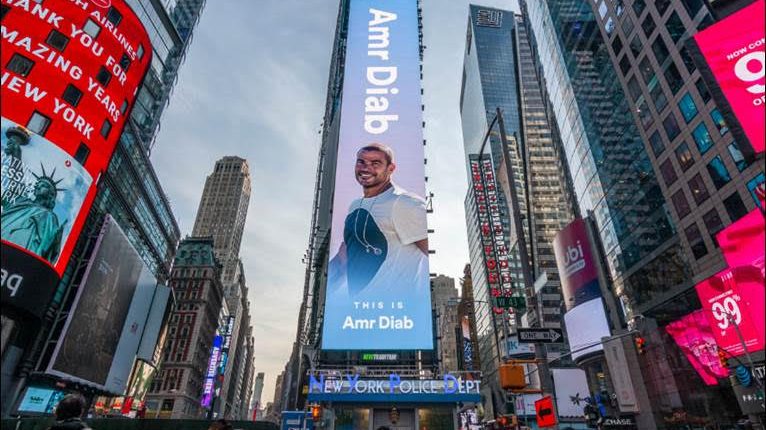 In the middle of New York’s Times Square, where thousands of international celebrities are celebrated with billboards viewed by millions of people every day, giant shining billboards of Egyptian Superstar Amr Diab were lit up in acknowledgement on Tuesday for his accomplishment of becoming the most listed Arabic singer on Spotify in the United States and Europe.

The billboard comes as a part of Spotify’s Global Cultural initiative, aiming to spread Arabic songs to people living outside the Middle East and North Africa (MENA).

Diab’s songs were included on various international and regional playlists, where his music continues to spread around the globe, according to a press release published by Spotify.

“Music is a language that speaks emotions and not only words. I am blessed to have

touched people around the world with my music,” ​Diab​ told Spotify.

“Spotify has allowed so many artists to connect with fans beyond borders and I am glad for that,” he added.

The music platform offers more than 50 million tracks from all over the world, freely provided to the public.

For his side, Managing Director of Spotify Middle East and Africa Claudius Boller said, “Bringing the world to artists and artists to the world is a fundamental part of what Spotify is about.”

“Experiencing Amr Diab’s devotion to Arabic music for nearly four decades straight and witnessing his fanbase expand across the world is beyond incredible. Today we are celebrating Diab’s legacy and we are proud to see him shine so brightly – literally – on the global stage,” he added.

Dubbed as the Rock, Diab’s songs have not only witnessed a gala attraction in the Middle East, but according to Spotify, the artist has a massive listening base in the US, which became the number one country streaming his music on Spotify, followed by Sweden and Germany.

No billboards in Cairo’s streets due to COVID-19: AdMazad Study

Hunger strikes on the rise in support of detained activists