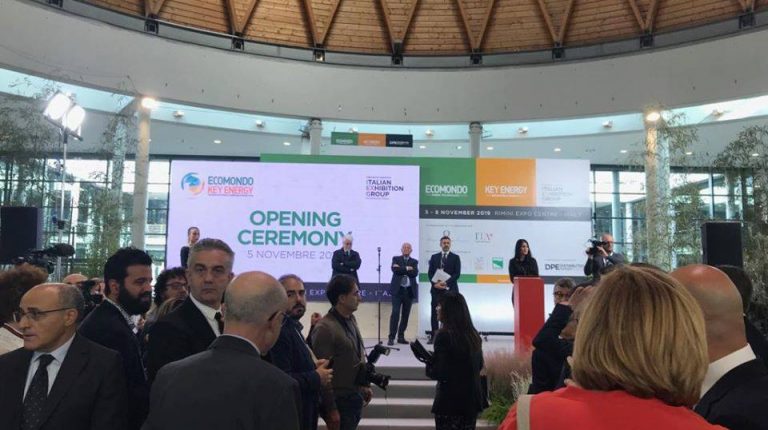 Organised by Italian Exhibition Group (IEG), Ecomondo green and circular economy exhibition concluded its events that lasted from 5 to 8 November at Rimini Expo Centre in Italy.

Ecomondo focuses on North Africa and the Euro-Mediterranean region. It was attended by 1,300 companies from 30 countries.

Daily News Egypt was present during the expo’s four days, during which it covered events and seminars that spotlighted business needs and opportunities in the green economy. Daily News Egypt felt the enthusiasm of Italian companies and their interest in investment and holding partnerships with Egypt.

Costa pointed to the active participation of the exhibiting countries to show their innovations in the field of circular economy and renewable energy. The exhibition witnessed serious discussions and exchange of experiences among the participants, he added.

After the opening session, the Italian-Egypt Business Forum was held for the first time, organised by Ecomondo in partnership with the Italian embassy in Cairo and the Italian Chamber of Commerce in Egypt.

The Egyptian delegation was led by Tamer Mostafa, director of the Minister of Environment’s office, and included Osama Abdel Wahed, Minister of Housing’s adviser for projects and utilities affairs, and Salah Bayoumi, vice chairperson of the Holding Company for Water and Wastewater.

The Italian-Egypt Business Forum highlighted the Egyptian government’s investments over the next five years in the field of environmental infrastructure, renewable energy, industrial and organic waste management, food, water, transport, and mobility.

At the beginning of the forum, Giampaolo Cantini, the Italian ambassador in Egypt, said via video conference call that Egypt is an important and pivotal country but it faces many challenges and needs to rely on alternative energies. He noted that Egypt’s distinguished location makes it an important hub and centre for energy export and exchange.

Cantini stressed that the Italian government and private companies can open great prospects for investment and cooperation with Egypt in the fields of renewable energy, waste recycling, and seawater desalination in the coming period.

He added that the Italian-Egyptian relations are strong, and there are many Italian companies working and investing in Egypt, pointing out that many Egyptian companies are looking forward to cooperate with Italian counterparts in the fields of alternative energy and desalination.

The Italian ambassador said the presence of government officials and private companies from Egypt in Ecomondo is a good gesture and an important step to hold further meetings to deepen cooperation between the two countries.

From the Egyptian delegation, Tamer Mostafa presented the government’s strategy for waste recycling and the investment opportunities in this field. He also highlighted laws and regulations governing investment in Egypt, in addition to possible mechanisms for the implementation of new projects to produce alternative fuels.

Mostafa also stressed the depth of Egyptian-Italian relations and the two countries’ keenness to increase their cooperation in the fields of waste recycling, seawater desalination, pollution reduction, and sewage treatment.

Egypt’s annual waste reaches 26m tonnes, of which 46% are in Greater Cairo and Alexandria, 30% in the Delta governorates, and 24% in the rest of the country. The efficiency of waste disposal in Egypt is 55%, as only 20% of total waste are recycled, and the rest is buried.

Mostafa said that the government has adopted a fixed tariff to buy waste-to-energy from private plants, estimated at 140 piasters per kilowatt, while the state is responsible for collection and transport of waste.

He pointed out that Egypt is currently intensifying efforts to increase waste recycling, and that the state is working to overcome the challenges hindering flow of funding in the sector.

Moreover, Gian Francesco, founder and executive officer of Entsorga Italia, said during the forum that his company is working to improve waste management by developing innovative technologies of high efficiency, environmental sustainability, and economic concepts.

Entsorga has developed several solutions in the areas of waste management and alternative fuel production with a special focus on providing the highest standards of health and safety, reducing the process’ impact on the environment, and continuous research.

Francesco expressed readiness to cooperate with the Egyptian government and invest in alternative fuel production, as well as enter partnerships with the private sector in the design and implementation of waste treatment plants.

On the other hand, Osama Abdel Wahed, from the Egyptian delegation, presented the government’s plan to launch several desalination plants with the aim to produce 2.5m cubic metres of desalinated water per day before the end of 2022.

Abdel Wahed stressed that 26 sewage treatment stations in Upper Egypt have been completed, and 26 other plants are currently under construction and are scheduled to start operation by the end of this year.

In addition, the state is upgrading and increasing the efficiency of existing five sewage treatment plants in Upper Egypt, and their development will be completed by the end of December 2019. It is scheduled to raise the efficiency of three other stations in the region soon.

Abdel Wahed called on Italian companies to invest in Egypt and establish new waste-to-energy plants to benefit from the newly issued system by the government.

For his part, Salah Bayoumi said that sewage treatment is of great importance to preserve the environment, reduce pollutants and their impact on public health, and make the best use of all available water resources.

Moreover, Sarah Dalasta, business development manager at Ecostar research-enterprise impact hub, said the company is keen on working in the Egyptian market and selling its equipment to companies wishing to launch waste recycling projects. She revealed that her company has sold 500 machines to 42 countries so far, and is seeking to enter the Egyptian market next year.

During the forum, some Italian companies working in waste recycling and transportation made presentations about their activities, including Fisia Italimpianti and Ecologia Soluzione Ambiente.

At the end of the forum, a cooperation agreement was signed between Ecomondo’s organising company IEG and Al Awael International Trade Fairs (ATF) to organise a joint exhibition and conference (Watrex Expo) in Egypt in March 2020.