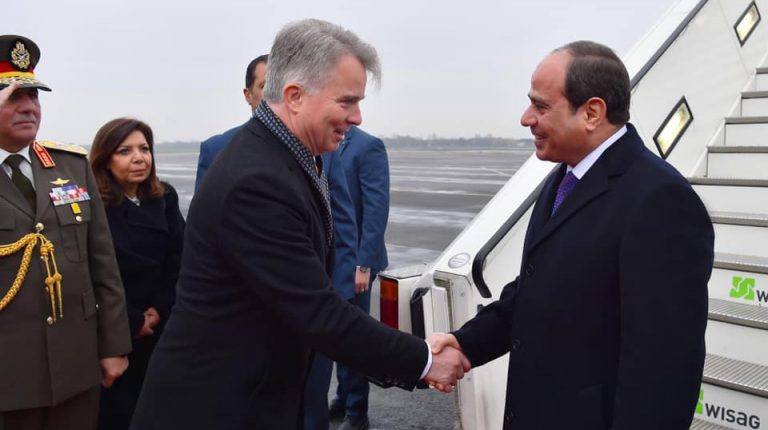 During his visit, Al-Sisi is scheduled to meet with German Chancellor Angela Merkel as they will discuss enhancing cooperation in various fields as well as issues of common interest.

The CwA was initiated under the German G20 Presidency in 2017 to promote private investment in Africa, including infrastructure.

It mainly aims at increasing attractiveness of private investment through substantial improvements of the macro, business, and financing frameworks, according to the initiative’s official website.

the visit to Berlin will witness the signing of a development agreement between Egypt and Germany, German ambassador to Egypt Cyrill Nunn said last week.

Nunn revealed that a €154m worth development agreement will be signed during the visit in the fields of new and renewable energy, energy efficiency, water, solid waste management, and technical education.

The cooperation funds between the two countries have reached €1.7bn and will be increased in the coming period, Nunn said, adding that 1,183 German companies are operating in the Egyptian market including 175,000 employees.

The ambassador added that the trade exchange between Egypt and Germany recorded €4.5bn, where €1.2bn were Egypt’s exports to Germany.

Earlier on Friday, Al-Sisi received a phone call from Merkel in which they discussed several regional and international issues of common interest including the crisis in Libya.

The president asserted the Egyptian stance on the Libyan crisis represented in restoring the national institutions, countering terrorists and extremist groups, and restoring security and stability in the war-torn country, according to the presidency’s statement.