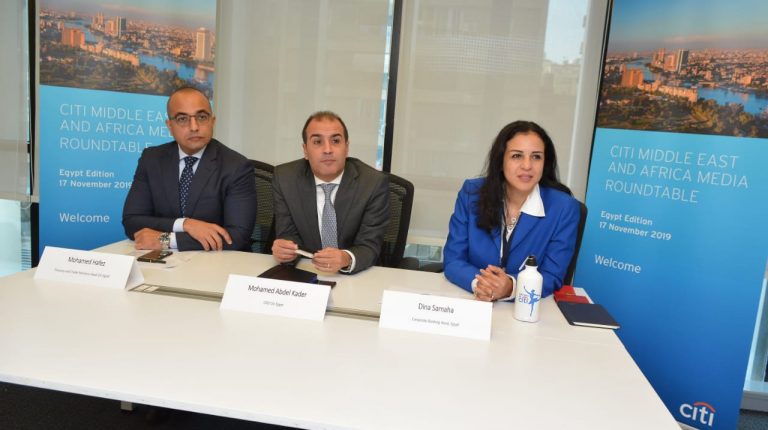 Citibank held a roundtable on Sunday to announce the winners of the Citi MENA Fintech Challenge. During this roundtable, the bank officials presented their vision of the Egyptian economy and their expectations of the bank’s activities during the coming period.

He explained that the current profit growth rate is good, especially with the low interest rate, a large percentage of the bank’s activities depends on dealing in financial instruments. Fortunately, this decline is normal.

But, Abdel Kader added, this rate of growth in profits – although declining – demonstrates a real activity of the company and the Egyptian economy, not just relying on debt instruments.

He pointed out that Citigroup is highly interested in the local market and has ambitions to expand further, as it is the group’s second-largest market in terms of profitability in the Middle East, and the second in the Africa and the Middle East region.

In this context, Dina Samaha, Corporate Banking Director of Citi Egypt, explained that the company has set a tentative plan at the end of 2018 to include approximately 40 firms by the end of 2020, explaining that the company has cooperated with all parties of the public sector, the private sector, and other concerned ministries to select these firms. The company succeeded in attracting 10 firms in 2019.

He stressed that the company does not intend to return to the retail banking market, which it exited years ago as part of a restructuring plan.

In 2015, Citibank Egypt, a subsidiary of Citigroup, signed an agreement to sell its retail banking and card services in Egypt to the Commercial International Bank – Egypt.

The sale was part of a strategy to accelerate the restructuring of Citibank’s global retail activities, focusing on 24 retail markets where the group has economies of scale and growth potential around the world.

“In addition to attracting more multinational companies in Egypt, which is the core of our business, we are present in the Egyptian market from different aspects,” he said.

Abdel Kader noted added that his company holds 60-70% of the custodianship activities in Egypt.

A custodian is a financial institution that holds customers’ securities for safekeeping in order to minimise the risk of their theft or loss.  It holds securities and other assets in electronic or physical form. It is responsible for the safety of assets and securities.

Abdel Kader believes that the outlook for the Egyptian economy is very positive at the level of fiscal and monetary policies after three years of the economic reform programme signed with the International Monetary Fund in November 2016, represented in the improvement of the growth rate, the decrease of the budget deficit and inflation, and the recovery of tourism.

“These are all the indicators that open the appetite of foreign investors to invest in Egypt, and in more sustainable areas now,” he said.

Abdel Kader expects inflation to reach 9% by the end of this year, according to Citi’s forecast. The current decline is significant due to the significant rise in inflation in the same months last year, which was the reason for this current decline. The rate is very good after inflation had reached nearly 34%.

He believes that there is room for further reduction in the rate of interest to encourage investors to invest more, although he stressed that there is no explicit relationship between the interest rate and the orientation of the local investor to borrow and invest.

As for the low interest rate and its impact on investment in debt instrument, he noted that foreign investors follow the interest rate as much as the economic indicators of the country.

Hence, he pointed out that the Egyptian government currently needs to cooperate with the International Monetary Fund, but not to borrow cash, as the government does not need more funding, but technical support.

He added that the current period is witnessing a high turnout of foreigners to invest in local debt instruments and the volume of current investments around $18-20bn.

Citibank is one of the largest banks in the world founded in 1812 and is the banking arm of Citigroup, operating in more than 100 countries around the world. The group has been present in Egypt since 1975 and is considered one of the oldest financial services companies in the world.

The bank provided about EGP 12m in grants between 2014 and 2019 to support entrepreneurs and small businesses with the aim of achieving the financial inclusion.

Mohamed Hafez, Head of Trade and Transactions Services at Citibank Egypt, said that Citigroup is transferring about $4trn in the form of settlements between different entities and correspondent banks in various foreign currencies.

He explained that the activity of this department focuses on the development of a range of products in terms of cash services, transfers, collections, and cards of various types as well as electronic channels.

He added that Citibank’s presence in more than 100 countries in addition to the bank’s relations with more than 3,000 banks, and the presence of group centers in a number of countries, including New York and Hong Kong, facilitate the provision of various services through a global cash services network

Hafez pointed out that the bank has recently focused on dealing with major companies, whose needs differ in light of the current economic variables.

He pointed out that the bank is interested in discovering modern technology “artificial intelligence and machine learning,” and “we have development laboratories spread around the world, noting that the bank has recently celebrated the 10th anniversary of its tech labs.