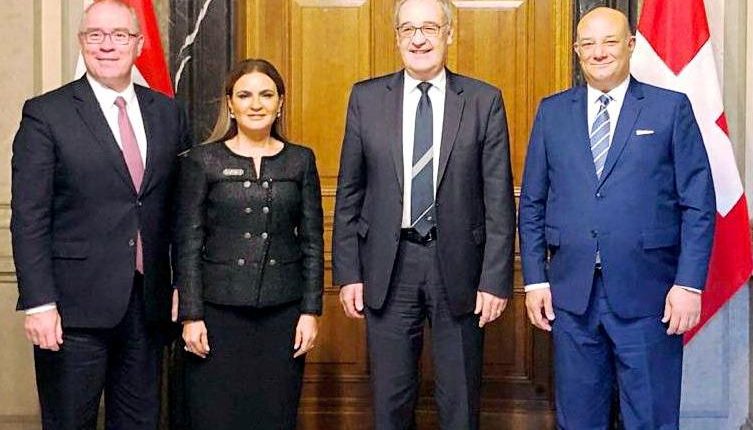 Egypt and Switzerland initially agreed on their cooperation strategy until 2024 over the Minister of Investment and International Cooperation (MIIC), Sahar Nasr’s visit to Switzerland that began on 14 November.

Nasr met with Guy Parmelin, head of the Federal Department of Economic Affairs, Education and Research (EAER) in the presence of the Egyptian ambassador to Bern, Hisham Saif Eddin, a statement of the MIIC mentioned on Saturday.

Both sides discussed boosting cooperation in education, vocational training, health, infrastructure, and renewable energy as part of the cooperation strategy from 2021 to 2024.

The current cooperation strategy ends in 2020 and includes funding worth CHF 86m, while Switzerland invested an additional CHF 700m ($707.1m) over the years in developmental projects.

For his part, Parmelin said that he will visit Egypt in February 2020 accompanied by a Swiss business delegation to closely identify investment opportunities in the Egyptian market.

Nasr held an expanded meeting at the Egyptian ambassador’s residence in Bern, which was also attended by representatives of the Swiss Agency for Development and Cooperation, the Swiss Federal Institute for Vocational Education and Training,  persons in charge of bilateral relations with the State Secretariat for Economic Affairs SECO, in addition to public and private companies.

According to the statement, the minister also praised Swiss companies’ successful stories in Egypt, calling on the Swiss companies to further expand in the Egyptian market, adding that a number of them will enter the market soon.

Switzerland is a major investor in Egypt, where around 70 Swiss companies are established. In 2018, Egypt was Switzerland’s leading export market in Africa, with exports valued at CHF 972m ($981.9m). With a free trade agreement through the European Free Trade Association, an agreement on the promotion and reciprocal protection of investments, a double taxation convention, and economic relations between Switzerland and Egypt is conducted within a solid bilateral legal framework.