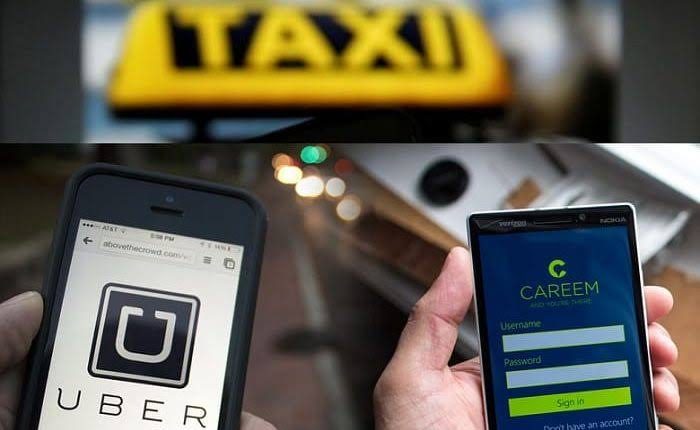 Every morning, 32-year-old Content Creator Heba Hussien uses ride-hailing applications to request two rides, the first is a car ride through Uber to transport her from her house to a bus meeting point, around a 10-minute walk, and then another through Swvl bus that drops her off directly in front her workplace.

Hussein lives in Maadi and works in Mohandessin. This daily trip costs her about EGP 70 and it takes approximately an hour if there is no traffic jam.

“It became impossible to walk for minutes in the streets of Cairo and public transportation is also a nightmare because of people’s intolerance toward women,” she said.

At first, Hussein began to use the Uber app for long-distance destinations or when it’s late. Afterwards, it became her daily means of transportation. “As a woman, feel kind of safe in an Uber car, where the vehicle windows are locked, the driver is not a threat, so nobody is going to hurt you in anyway,” she added.

If commuters did not like her appearance or outfit, they might react violently, she said “I would feel uncomfortable and threatened,” Hussein added.

Cairo is the world’s most dangerous megacity for women according to a report titled “The World’s Most Dangerous Megacities in the World 2017” issued by the Thomson Reuters Foundation in October 2017.

Uber, Careem, and Swvl apps have given an alternative to women who seek decent rides without being forced to fight over the fares or subjected to sexual harassment, Hussein pointed out.

However, after Egypt’s government increased fuel prices by as much as 50% in June 2018, as part of an IMF-backed economic reform programme, fares of transportation of all kinds increased signficantly.

“It [Uber] is not affordable all the time. The fares are sometimes illogical especially after the recent increases in fuel prices. The fare from home to work was EGP 40, but now it is EGP 90,” Hussein noted.

She said that she pays about EGP 3,500 monthly just for Uber, which is more than three-quarters of her salary.

With all of Uber’s advantages, Hussein complained that its services’ quality has declined in recent months, explaining that not all Uber drivers are professional.

“I sometimes feel as if I am taking a taxi or a public bus – when using Uber recently –, not the decent services or the peace of mind I pay most of my money for,” Hussein noted.

With ride-hailing companies expanding their services in Egypt, they are accepting more drivers that are “unqualified to work for them,” she added.

“To be honest with you, I am not looking for an excellent service, we are in Egypt at the end of the day, but at least a less harmful [compared to public transport] and decent service, ” Hussein concluded.

The US-based ride hailing app company Uber was launched in Egypt in 2014. The company keeps expanding and now operates in different cities including Cairo, Alexandria, Mansoura, Tanta, Damanhour, and Hurghada.

According to the company, more than four million people have used Uber with almost 160,000 driver-partners. However, there is no detailed data over the number of women using the app in Egypt.

The UAE-based Careem operates in more cities in Egypt than Uber, including Cairo, Alexandria, Port Said, Banha, Sohag, and Fayoum.

For Swvl, it is a Cairo based bus transport technology start-up launched in Egypt 2017, producing an alternative to public transportation in Cairo, Alexandria, with fixed routes rides, timings, and prices.

“We mainly focus on female users, as we are keen on establishing a safe society for women without any form of sexual harassment,” a Swvl official told Daily News Egypt.

The official added that more than 50% of the app-users are women, mainly female university students who live far away from their universities.

The official added that they always update in their apps to offer more safety measures to ensure that neither the driver nor any male commuter would harass women in anyway using the app.

However, the official noted that they did not receive a complaint that included a sexual harassment incident, as most of them are related to the timing or the driver attitudes.

The company is firm about women safety, the official clarified. If a female reports such behaviour, the staff is able to get into the details of the trip, the route, and the driver, the official said.

“We pay for our safety”

A 31-year-old female writer who uses Uber frequently said that she abandoned public transport and white taxis in an attempt to get a kind of “safe” transport. “We pay money for a safer ride,” Weaam Mokhtar told Daily News Egypt.

Mokhtar decided to use Uber daily after several experiences with white taxi drivers who gave her an impression that they would kidnap or rip her off.

“I took a white taxi from Nasr city to El-Sayeda Zainab, but after a few minutes, the driver made a ‘suspicious’ call in which he gave the other side detailed information of his route. I felt something wrong would happen, I asked him to stop to get out the car, he refused and tried to convince me to change my mind, but eventually he dropped me off,” Mokhtar narrated.

Another time, she said that a taxi driver kissed her hand when she delivered him the fare, while another told her that he “liked her breast”.

As a writer, she works sometimes as a full-timer and freelancer. Before accepting any job offer, she considers if the salary will allow her to still use Uber or not.

Mokhtar spends about EGP 2,500 monthly on Uber. “When you get older, your tolerance with what you encounter in the streets decrease, so you choose to avoid it altogether.”

For Mokhtar, her experience with Uber is better than other experiences circulated on social media, but it also has its downsides.

“I met a diver who turned back to look at my legs and others who stare at me through the mirror, but overall, Uber drivers are better than taxi drivers as eventually, you can report your complaints to someone who can take action,” she added.

Shimaa Hassan, 33-year-old is an operation officer at ‎Save the Children Egypt organisation. She first learned about Uber from her work which offered employees a business account for their field rides.

“They cover field rides, but I cover my roundtrips to and from work which is in Maadi now,” Hassan told Daily News Egypt.

Earlier in 2016, her work’s headquarters was in Ard El Lewa, and she used to ride a bus then a Tuk-tuk. But now she uses Uber and Swvl for which she pays about EGP 4,000 monthly, almost half of her salary.

Hassan said that she stopped using the Cairo Metro because it is extremely crowded. The white taxi is also problematic for her because she has to focus on the road, or fight over fares, smoking, and deal with the drivers’ curiosity.

“I have not personally gone through a dramatic situation with public transport or a taxi, but I have a friend who was robbed in a taxi,” she added.

Hassan, as a pregnant woman, said that she fears facing a situation that puts her or her child at risk.

“Sometimes I feel tired and fall asleep in the Uber car. I feel I am kind of safe since I can share my ride with my husband. If I have a complaint, I would report the driver,” she added.

“It is not safe by all means ”

Mariam Ibrahim, 27-year-old said that she uses Uber and Careem because public transport “is not safe.”

The computer engineering graduate left her hometown of Alexandria two years ago to settle in Cairo and search for a job.

“When I use the Cairo Metro I feel afraid of people and the crowds, I feel it is not safe as anyone can hurt me, even women. Two face-veiled women had cut off my female friend’s hair. It is not safe by all means,” Ibraheem said.

Ibraheem visits her hometown regularly, she normally commutes by train, where she faced unpleasant experiences, “one day, I was heading to Cairo on Alexandria’s train. When I got off the main station in Ramses, a man sexually harassed me. I slapped his face and called the station’s police,” Ibrahim narrated.

“He ruined my day, I was with my female friend to spend good time in the city, instead, we stayed for four hours to file a report against the harasser,” she concluded.

Ibrahim still uses the train but avoids crowded days and weekends. She depends mostly on Uber and Careem, in Cairo, spending around EGP 3,500 monthly. Her family helped her in the expenses because her salary was EGP 4,500.