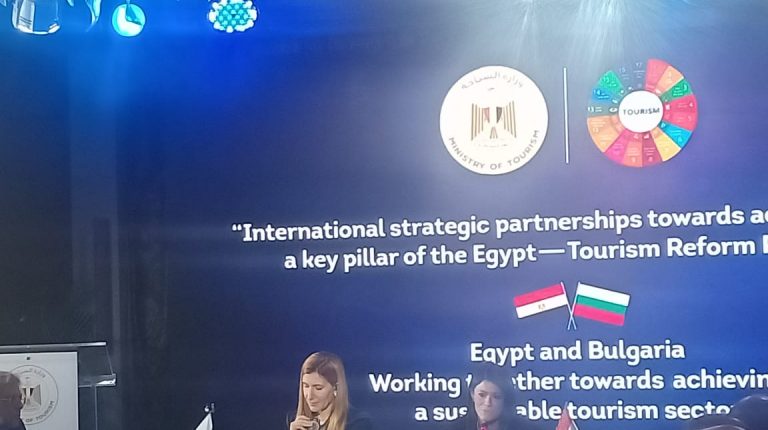 Egypt has received 3,477 Bulgarian tourists from January to September 2019, compared to 2,859 tourists during the same period in 2018, a 21.6% hike, the Bulgarian Tourism Minister Nikolina Angelkova told Daily News Egypt.

The Minister also revealed that an average of 1,500-2,000 Egyptians visit Egypt every year, while an average of 3,000-4,000 Bulgarians travel to Egypt annually. She mentioned that the number of Egyptian tourists is small, but the Bulgarian state is willing to invest a lot in tourism advertisements.

Angelkova mentioned that the Bulgarian tourists mainly visit Sharm El-Sheikh, Hurghada, and Cairo, during the summer season, while the Egyptian tourists that visit Bulgaria are enjoying cultural and historical tourism.

Notably, Egypt’s Minister of Tourism Rania Al-Mashat signed a memorandum of understanding with her Bulgarian counterpart in May for boosting cooperation between the two sides in the tourism field, including the development of joint tourism products in the fields of cultural, beach, festive, and food tourism.

The MoU includes the exchange of information related to the organisation and participation in international events such as large-scale annual tourism exhibitions and conferences organised in both countries, in order to promote the two countries` tourism products.

The two sides also agreed on cooperation in the development of tourism infrastructure in their countries.

Commenting on this MoU, Angelkova stated that she expects 50% increase in the number of the Bulgarian tourists to Egypt.

“Challenges and opportunities are everywhere, tourism is the most competitive sector and what we have to offer is high-quality products, safety of the destination, easy connectivity, and marketing. Those are really important sides of every country policy when offering tourism products,” she said.

She praised Egypt’s tourism reform programme, stating that through this programme, Al-Mashat is trying to foster and encourage people to be more engaged in tourism.

“So, I think tourism is essential if we want to boost the economy further, and it’s one of the sectors that gives the possibility to everyone to be engaged,” she assured.

In that context, the Bulgarian Minister revealed that the tourism represents 12% of her state’s GDP.

In response, Egypt’s Minister of Tourism stated that the Bulgarian-Egyptian relationships are very strong, based on very strong political agreements.

She stated that Egypt’s tourism industry is of utmost importance important, and is one of the most important sources of national income, mentioning that it represents 15% of Egypt’s GDP.

He pointed out that these trips will enable tourists to visit the Great Egyptian Museum and the Giza Pyramids.