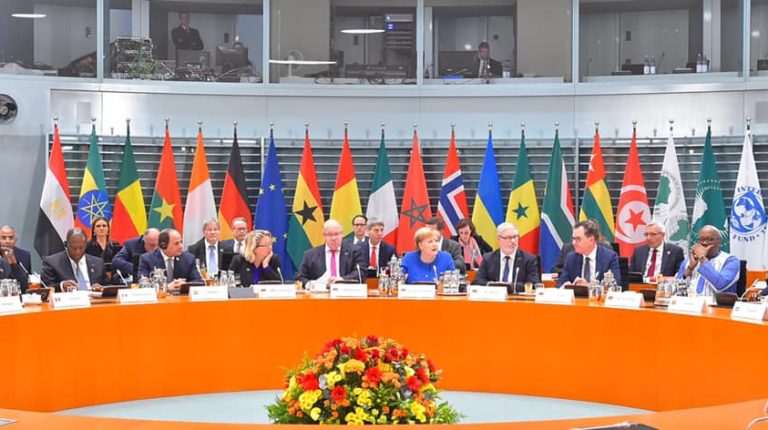 Egypt’s President Abdel Fattah Al-Sisi praised the qualitative leap in bilateral relations between Egypt and Germany, expressing his aspiration to maximise these friendly ties in the coming years, enhance political coordination, and exchange views on different issues of common interest.

During a Wednesday meeting with the German Chancellor Angela Merkel in Berlin, the president urged further German involvement in Egyptian development plans, and doubling of German investments in Egypt benefiting from the recent economic reforms conducted by the government to improve the business climate and create promising opportunities in the country.

According to a statement from the Egyptian presidency, Merkel hailed the close ties between Cairo and Berlin, particularly in the economic side. Egypt is one of Germany’s most important partners in the Middle East in light of its pivotal role for achieving stability and security in the region, she said.

Both leaders addressed ways of coordination between Egypt as a leading partner of the European Union in combating terrorism and illegal immigration, as well as the latest developments in a number of regional and international issues of common interest.

These issues include the crisis in Libya. Al-Sisi and Merkel agreed on the joint efforts to settle the situation in Libya in a comprehensive and integrated manner that deals with all aspects of the Libyan crisis, contributes to the elimination of terrorism and preserves the resources of the state and its national institutions, and limits foreign interventions.

Speaking at the G20 and Africa summit in Berlin on Tuesday, Al-Sisi said that addressing Africa’s desired development is incomplete without discussing how to create an environment for any serious endeavour to develop the continent.

The president called for the activation of the Africa Investment and Development Support Fund with its three arms, providing financing, investment data, access to loans and empowering small and medium-sized enterprises, in addition to other measures such as strengthening the system of investment guarantees, to create a climate of confidence and interest in African markets.

He also highlighted Egyptian efforts to achieve the economic reform and its negative impacts on the Egyptian economy and investment climate. He called for G20 companies to invest in Egypt’s national projects particularly projects in the Suez Canal Economic Zone.