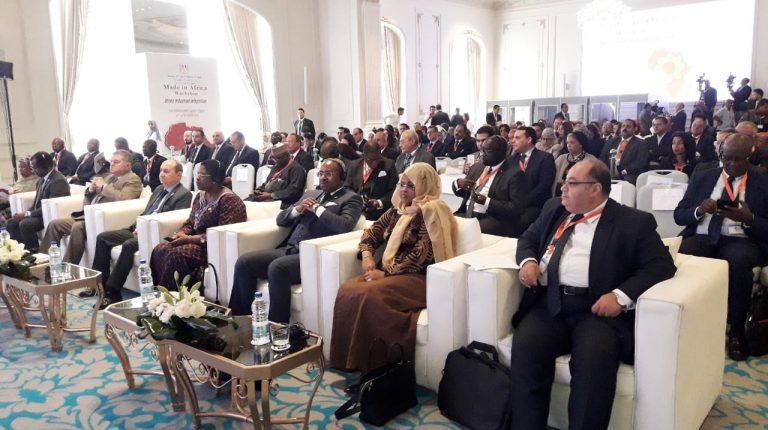 Egypt’s Ministry of Public Enterprise Sector is establishing a joint venture in cooperation with the Egyptian private sector, to manage the Gosoor (Bridges) Project, which aims to boost intra-trade between Egypt and other African countries, the Minister Hisham Tawfik announced during the “Made in Africa” workshop for investment on Wednesday.

He added that Gosoor will provide an integrated logistics and transportation services chain for external trade and industry with 10 East African countries through companies under the Public Enterprise Sector Ministry, in addition to providing a goods insurance service.

Meanwhile, Emad El Sewedy, CEO and chairperson of El Sewedy Electrometers Group, said Africa is a natural extension of the Egyptian market, stressing the importance of the participation of Egyptian business community in all economic fields in the African continent.

He pointed out the importance of enhancing the role of international financial institutions in the implementation of development projects in Africa.

El Sewedy also affirmed the need to unite African economic efforts, under the slogan “Made in Africa”, with more attention to the local manufacturing.

He highlighted the importance of activating the role of the African Development Bank (AfDB) to support African industries.

On the activities of El Sewedy Electrometers in the continent, El Sewedy said that the company has projects in Ghana, Zambia, and Ethiopia, pointing out that the Ghana factory provides 150 job opportunities.

During the event, Gehan El Sokkary, principal socio-economist at AfDB, said that the African continent has taken serious steps in the course of economic growth compared to many European countries. This year, the African continent was expected to achieve an economic growth rate of about 4%, while some European countries were expected to grow by only 1.9%, reflecting the great change witnessed by the continent.

El Sokkary pointed out that there are five African countries that have been classified in the last five years of the largest economies in the world.

Noteworthy, industrialisation in Africa faces many challenges, the most important of which is the low industrial competitiveness, which generates only $700 per capita, almost one-third of what the industry in Latin America offers and less than one-fifth of what East Asian countries offer, in addition to the decline in productivity in Africa associated with the small size of industrial enterprises, besides, competition from informal sector, according to El Sokkary.

The AfDB is cooperating with governments and the private sector in the field of infrastructure, electricity, roads, and entrepreneurship, providing technical advisory services, financial inclusion services and financing low-risk investments, she added.

Africa is the world’s most attractive region for foreign direct investment, accounting for nearly 30% of the world’s mineral resources. North Africa has a vast oil and natural gas reserves, along with most of the strategic nuclear crude in its desert, such as coltan, gold, copper and others.

Moreover, Amir Abdoudou Artine, president of Chamber of Commerce, Industry, Agriculture, Mines, and Handicrafts of Chad, said, “The African continent is often seen by foreign countries as just a continent full of raw materials on which European countries rely for industry or as a continent where those foreign countries can market their products.”

He pointed out that given the economic growth rates and the technological development in the continent, Africa can market itself and its new position on the world economic map.

Artine added that there are a large number of raw materials exported by the African continent at low prices due to the lack of any added value, most importantly sesame and Arabic gum, pointing out that these products are sold at double the prices in Asian and European markets after adding value and minor adjustments, which represents a major challenge for governments and the African private sector on the way to double production and increase competitiveness of African industry.

Meanwhile, Khaled El Mekwad, representative and head of the United Nations Industrial Development Organization (UNIDO) Regional Office in South Africa, said that the UNIDO is implementing 607 development projects in the African continent in sectors of energy efficiency and renewable energy and reduce water use and carbon emissions.

El Mekwad added that UNIDO is implementing a large number of projects to support youth, women and marginalized groups to face the instability experienced by some countries of the continent.