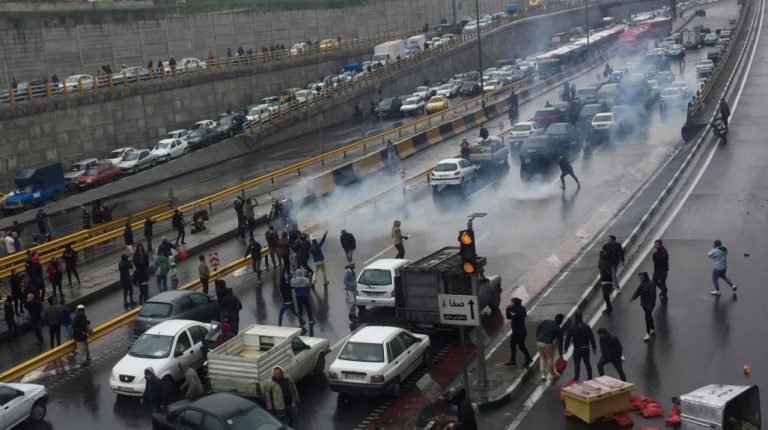 Protests in Iran against fuel price hikes have calmed on its fifth day after the government’s efforts to disperse demonstrations through warnings and internet shutdown.

The judiciary spokesperson Gholam Hossein Esmaili said in press statement on Tuesday that “calm has been restored in the country.”

The situation subsided after the Islamic Revolutionary Guard Corps (IRGC) warned of “decisive” action if the unrest does not cease.

On Monday, three members of the Iranian security forces have been killed by protestors in Tehran province. FARS and ISNA news agencies quoted a statement by the Sayyid Al-Shohada Battalion saying the men “were stabbed to death” after being caught up in a “rioters’ ambush”.

The assailants carried knives and machetes and ambushed a Revolutionary Guard and two members of the Basij militia west of the capital, the news agencies reported.

On Monday, online videos showed protests continued in several cities despite Internet shut down. In most of the Iranian cities, there is a heavy presence of security forces in the streets.

Several people, including members of the security forces and police, have been killed and around 1,000 “rioters” were arrested during the protests, authorities said. The exact number of people who died in the fuel protests remains unconfirmed.

The protests were seen as renewed pressure on Iran’s government as it struggles to overcome US’s sanctions strangling the country’s economy since President Donald Trump unilaterally withdrew America from Tehran’s nuclear deal with world powers over a year ago.

Iran has long suffered from economic problems since its 1979 Islamic Revolution cut off, decades-long relationship with the US, and an eight-year war with Iraq in the 1980s.

Football threatens to spark protests as Iran goes to the polls