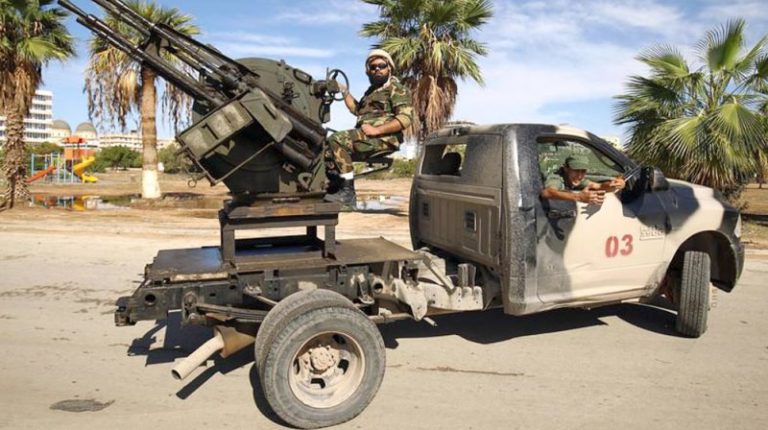 The LNA said in a statement that a Turkish ship arrived in Misrata harbour carrying “military vehicles and armour” to use them in “aggressive operations,” targeting the security of the North African country.

The LNA added it received confirmed intelligence after tracking and monitoring the Turkish shipment before destroying them, adding that a huge explosion resulted in its airstrike due to the weapon depot, the statement added.

The LNA also “warned Turkey to stop its military support to terrorist militias” in Libya.

This came in the same day as an air raid hit a biscuit factory in the Libyan capital, Tripoli. At least ten people were killed, and more than 30 others were wounded, the UN’s special envoy to Libya, Ghassan Salame told the U.N. Security Council during a regular meeting to discuss the situation in Libya.

The LNA accused Turkey of supporting numerous extremist militant groups, in addition to supporting the Government of National Accord (GNA), an interim government formed in Libya under the terms of the Libyan Political Agreement signed in 2015 and headed by Fayez Al-Sarraj.

Since the fall of former President Muammar Al-Gaddafi, Libya has remained in chaos and is divided between two governments. The oil-rich country has been suffering from a financial crisis due to clashes between militias and forces loyal to these governments.