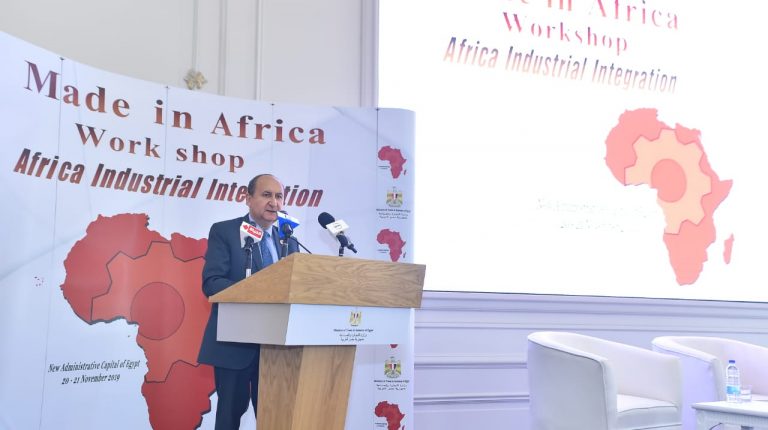 African economic integration mainly requires achieving financial inclusion to encourage more trade finance and lending, especially in light of the increasing focus on insurance, leasing, and stock exchanges related to the development of capital markets and infrastructure development in the continent, said Egypt’s Minister of Trade and Industry Amr Nassar.

During the Made in Africa workshop for investment on Wednesday, Nassar added that the role of African financial institutions is pivotal in creating an enabling environment for developing a modern African financial system to mobilise domestic resources and foreign direct investment among African countries.

This is to finance the African Agenda for structural economic transformation, including the African Union’s Agenda 2063 and its major projects, the African Continental Free Trade Agreement (AfCFTA), ultra-fast African train, and commodity strategy.

The Minister stressed the importance of allowing regional economic blocs to follow up and implement regional integration plans and programmes.

He pointed out that the continent is on the threshold of a new phase in the process of joint action, which requires cooperation to ensure the advancement of regional and continental integration on a sound and sustainable basis.

The minister noted that the activation of AfCFTA is an urgent necessity to reach the objectives of the continent to achieve its aspirations and meet its challenges, as well as open new horizons for integration and development across the continent.

He added that the AfCFTA is a big step on the road towards economic integration, through the actual liberalisation of trade.

“The implementation of the agreement achieves real qualitative shifts in economic performance, development, regional, and continental integration through productive and commercial integration based on competitive advantages and establishing extended value chains on the continent to ensure its people to benefit from its promising resources,” the minister said.

He stressed the important role of African Ministers of Industry in meeting the challenge of access to African industrial integration based on strengthening regional value chains that would contribute to the integration of African economies into the global economy.

Through organising ‘Made in Africa’ workshop, Nassar stated that Egypt is launching an open participation call to draw a clear roadmap towards achieving African industrial integration and establishing mechanisms that enable African leaders and decision makers to unify priorities and agendas for achieving industrial integration.

He added that the workshop will also discuss the development of transport and communications infrastructure to enable reaping the fruits of trade liberalisation in the continent. In addition, it will facilitate transportation and decrease the cost of transporting goods within the continent, which is the highest globally.

The made in Africa workshop is being held on Wednesday and Thursday with the participation of the private sector representing 25 African countries, eight European countries, and China.

Cement crisis: Egypt stocked up with enough reserves for 20 years