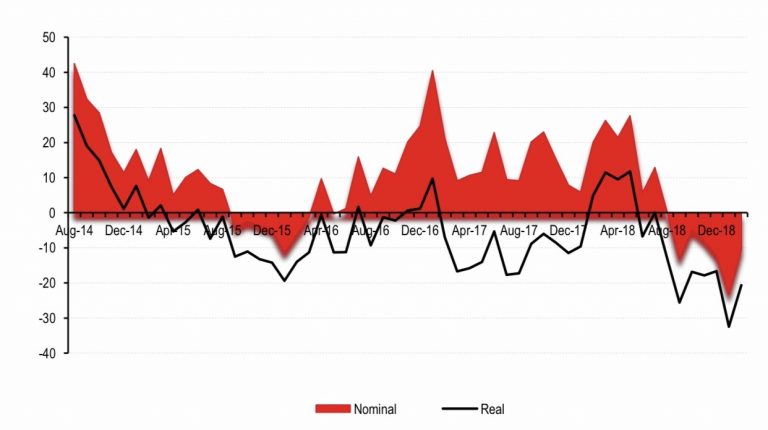 Egypt’s real estate accounts for 16% of Egypt’s GDP, and employs 5% of the country’s labour force, noting that the private sector is receiving the largest share of private investments estimated at 15% of total investments in the country in 2018, HSBC revealed in its latest report on the real estate sector.

At the end of 2018, Egypt’s population reached 100 million with only 6% of the land utilised. Moreover, Egypt is the most populous country in the Middle East and the third-most populous in Africa with an annual population growth of 2.45%.

The report added that there is a huge migration out of congested cities particularly in Cairo, fuelling the development of new communities by the private sector. Given the demographic pressure, more than 500,000 new residential units are required each year to keep up with existing demand, with the private sector delivering less than 15% of this figure.

Therefore, urbanisation and increased land utilisation is a priority for the government’s New Urban Communities Authority, which aims to increase this percentage of land utilisation to 14% by year 2050.

As a result of this current under-supply of housing and over-crowding in many major cities, a total of 20 new mega cities are planned for development covering a total area of 580,000 feddan, with the aim of accommodating 30 million people.

The new cities planned are in Cairo, Giza, Dakahlia, Beheira, Port said, Matrouh, North Sinai, Beni Suef, Minya, Assuit, Qena, Luxor and Aswan, with the largest being the New Administrative Capital east of Cairo. The report explains that, despite the government’s sizable ambitious, provision is slow as a result of significant shortfalls in investments.

The market is not a single homogenous sector across Egypt but is driven by large developers building first homes in greater Cairo and second by the beach. Additional segmentation applies to classes divided into luxury, upper middle, middle class, lower middle, and social housing. Despite the focus of developers on the more upper tiers of the market, in regional terms, the average house price in Egypt is low, and the rental yield high.

Moreover, HSBC economics team remain positive on its view on the economic outlook for Egypt. The economy is largely supportive for the real estate sector, according to the report, driven by a marked drop in realised inflation to levels since 2015, and interest rate cuts in the last Monetary Policy Committee meeting, 650 bps below the cycle peak that followed the late 2016 devaluation of the Egyptian pound.

Although Egypt doesn’t have a well-developed mortgage market, falling interest rates should still be beneficial to property prices as relatively high residential investment yields and inflation protections serve to draw incremental capital into the sector.

In capital markets, the HSBC team believe that residential developers do not look to be expensive based on their forecast estimates for Palm Hills Development (PHDC) and SODIC. They initiate SODIC and PHDC buying with target prices of EGP 23.1 and EGP 2.9, respectively. In the context of the EGX30 index, there are eight real estate companies included that collectively comprise 16.3% of the overall index. Of these, PHDC and SODIC represent 3.55%.

Palm Hills joins the race to compete for HHD