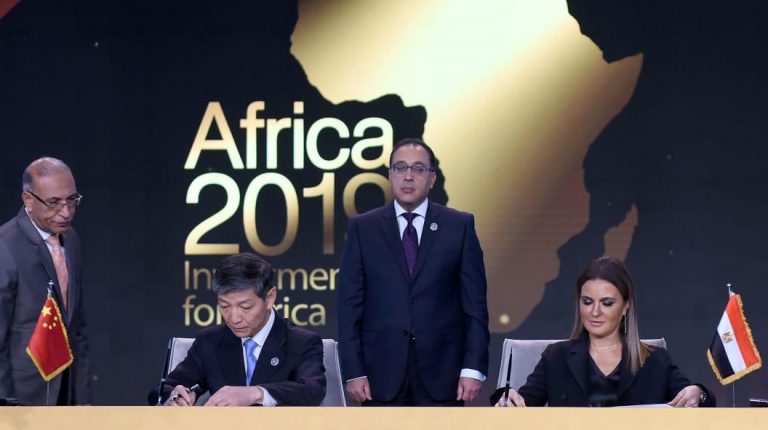 Prime Minister Mostafa Madbouly witnessed on Saturday the signature of 11 agreements and announcements of new investments worth $3bn, within the activities of the Africa Investment Forum 2019 held in the New Administrative Capital (NAC) under the auspices of President Abdel Fattah Al-Sisi.

The agreements included investment cooperation with Egypt, Djibouti, and Angola, in addition to development agreements between Egypt and Kuwait, France, China, the European Investment Bank (EIB), and the European Bank for Reconstruction and Development (EBRD).

The first agreement was signed with Pedro Luís da Fonseca Minister of Economy and Planning of Angola, aiming to strengthen and deepen investment and trade ties between the two countries in the fields of agriculture, tourism, industry, infrastructure, mining, construction, and health.

The second MoU was signed with Director General of Djibouti’s National Investment Promotion Agency (NIPA) Mahdi Darar Obsieh to enhance bilateral investment relations and developing mutual cooperation by establishing an efficient and effective regulatory framework to exchange information on the investment climate and environment in both countries and investment initiatives in Egypt and Djibouti.

This can achieve mutual economic objectives of both parties, informing them of available investment opportunities.

Moreover, the MoU aims to cooperate between the two parties to organise visits for delegations of businessmen and investors, participate in investment events held in the two countries in order to support communication between Egypt and Djibouti, and exchange best practices, technical expertise, and knowledge between the two sides.

Moreover, Nasr and Abdulwahab A. Al-Bader, director general of Kuwait Fund have signed an agreement for the completion of a $83m Horizontal Road 4 project within the second phase of the Sinai Peninsula Development Programme.

On the sidelines of Africa Investment Forum 2019, Nasr has agreed with Fabio Grazi, the director of the French Development Agency (AFD) in Egypt. The agreement, which is an annex to the framework agreement signed between Egypt and the AFD in 2006, provides the application of tax exemption in favor of the activity of the development financial institution PROPARCO from the AFD in Egypt, which finances private sector operations.

Over and above, the Egyptian Minister has signed a grant agreement between Egypt and China for economic cooperation worth $42m for implementing priority development projects for Egypt to be invested in human capital, especially in education and health that will contribute to improving the lives of citizens.

Furthermore, the European Bank for Reconstruction and Development has signed three agreements represented by the President of the EBRD Suma Chakrabarti, to strengthen electricity networks worth $201m for the Egyptian Electricity Transmission Company (EETC).

The EBRD’s president , Chairperson of Banque Misr Mohamed El- Etreby, and Sarwa Capital Holding for Financial Investments are to complete the issuance of securitisation bonds to the New Urban Communities Authority (NUCA) for EGP 500m within the framework of EGP 4bn.

Ayman Elsawy, managing director of Sarwa Promotion & Underwriting, commented, “It is indeed a pleasure to participate in structuring and promoting this issuance of NUCA’s securitisation bond, and be part of their success tapping into debt capital markets as an alternative way of financing urban infrastructure of its sustainable cities. We see this issuance as a positive start towards diversifying their funding base and attracting foreign investments to the country.

Moreover, it reflects the rising investor confidence in the Egyptian government and its plans toward sustainable economic growth, in addition to the development of the fixed income market in Egypt.”

Accordingly, Egypt and International Islamic Trade Finance Corporation (ITFC) have signed the first tranche of the Agreement on Financing Trade in Imports and Exports to African Countries between the ITFC and the African Export-Import Bank (Afreximbank) worth $100m within the framework of the $500m.

The World Bank’s Country Director Marina Wes and Minister Nasr signed an agreement for an additional grant in the amount of $ 1.7m for the Equal Access and Simplified Environment for Investment (EASE) Project.

The EASE Project and its additional finance are financed by the Middle East and North Africa Transition Fund. The project was initially launched in 2016 with the aim of increasing private sector investments and accordingly create more private sector jobs through simplifying lisensing requirements and availing transparent industrial land allocation processes.

Cement crisis: Egypt stocked up with enough reserves for 20 years