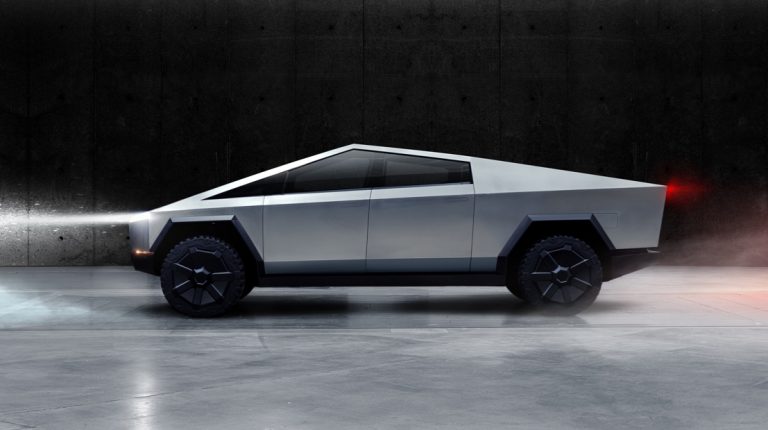 Billionaire entrepreneur, and CEO of Tesla  Elon Musk unveiled a long-awaited electric pickup truck in Los Angeles. Following the failed demonstration, Tesla’s share price dropped by 6% since the market close Friday, pushing Musk’s net worth down by $768m in a single day to $23.6bn. The 48-year-old founder is the 41st-richest person in the world.

The revolutionary design looks different from any pickup truck ever released. Cybertruck’s exterior is made from stainless steel alloy, similar to what SpaceX rockets are made with. Musk states that the alloy is bulletproof and can withstand nine-millimetre handgun bullets.

During the unveiling, a man with a sledgehammer hit the sides of the truck without damaging it. However, the truck’s metal glass windows broke when a metal ball was thrown at the truck’s windows, defying claims about its ‘unbreakable’ nature.

With a futuristic design, the Cybertruck is shaped like a large metal trapezoid on wheels, more like an art piece than a truck.

The new truck is not only revolutionary in design, but also features strong performance. Its low-end version has a single-motor and rear-wheel drive that should get 400 kilometres per charge.

According to Musk, the new truck can go from 0 to 100 kilometres per hour in less than 6.5 seconds at the low end, the mid-range will do it in 4.5 seconds, and in 2.9 seconds for the high-end version.

The towing capacity for the single motor version is around 7,500 pounds, the dual-motor will handle around 10,000 pounds, and trimotor around 14,000 pounds.

Yet, the newly launched truck was not cheered by Wall Street analysts. According to Bloomberg, 12 analysts have issued buy ratings for the stock, nine have issued holds, and 16 have issued sells.

“We believe there are important unanswered questions to be able to assess potential buyer interest in the model, and whether or not this could attract commercial fleets or remain a consumer niche vehicle,” wrote Deutsche Bank analyst Emmanuel Rosner in a research note, maintaining a hold rating. Rosner questioned whether consumers would be turned off by the Cybertruck’s design and whether commercial buyers would trust its durability noting, “the shattering of the truck’s unbreakable glass windows during the live demonstration was not a good start.”

Over 60 US public service agencies use Zero electric motorcycles