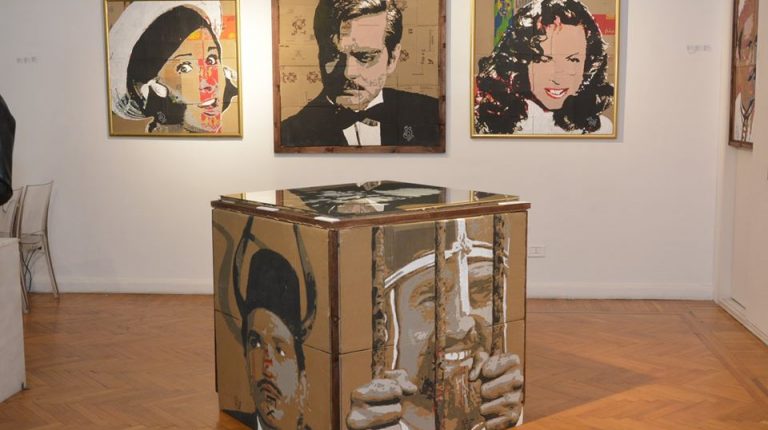 Without even noticing, a lot of people pass by empty carton boxes occupying Cairo’s streets, considering it either invisible or not worth paying attention to. However, for Artist Ahmed Ezzat, the cardboard chips boxes, the carton box of biscuits, cigarettes, or even water bottles are considered an enriching base of mixed colours to work with.

Inside Zamalek Art Talks Gallery, Ezzat’s first exhibition, A Tale to Tell, brings back the warmth of nostalgia, drawn over hundreds of carton boxes which the artist used to present his heart out.

A Tale to Tell is a journey in time to Egypt’s 1960s in which the artist spent his childhood. It displays Egypt’s artists from the golden era back to life through dozens of portraits that Ezzat drew.

In vivid colours, Ezzat’s technique is a mix of graphic art, collage, and paintings inspired by a parody or commentary of Egyptian popular culture.

“I belong to the black and white TV channels generation, and this exhibition is all about the generations who were born and raised before the internet,” Ezzat told Daily News Egypt.

From cinema’s super stars including Soad Hosny and Omar Sharif to Alexandria’s famous yellow taxi going through the official transportation tool, the tram. Ezzat revived the childhood of a whole generation who opened their eyes to a slow lifestyle rhythm that allowed them to enjoy its details.

When portraying multiple unrelated topics, Ezzat believes that his nostalgia and his remaining childhood memories are the ultimate connection among them all.

“The main theme that took over me while working at these paintings was my childhood; that is why I reflected almost everything I remember about it in this exhibition. This is my tale that I want to tell the world about,” he added.

His memories and dreams as a young boy were the main trigger that led to the final display from the project.

Ezzat uses carton boxes as his own drawing canvas. He believes that they bring out a stronger impact within the context of the drawing with their texture, colour, and even some of the written words on them.

He usually stumbles upon them at the kiosks, to find only thrill and enthusiasm by owners to sell them. Throughout his work on this exhibition, he recycled around 600 carton boxes to draw around 150 portraits, of which only 60 are on display at the exhibition.

The self-taught, almost retired banker spent the past three years collecting carton boxes and preparing them for drawing. Ezzat spends much of his time treating the boxes before using them as a background for his drawings, in order to have them polished to maintain their colours.

Despite having the passion for art all of his life, Ezzat never believed that “his portraits deserve to be showcased in an exhibition.”

“The pop art genre is not quite famous in Egypt, unlike the United States and Europe. That’s why I never imagined it would attract people or have a large number of fan base,” Ezzat explained.

He further added that for years the only exhibitions he had his pictures shown at were his office and house, untilpeople convinced him that they are beautiful and are worth being displayed for the public.

Speaking of the exhibition’s success, Ezzat revealed that it was beyond his exceptions, motivating him to display the rest of his pictures as well as the sculptures he made.

The exhibition kicked off on November 11 and will last until the 24th.