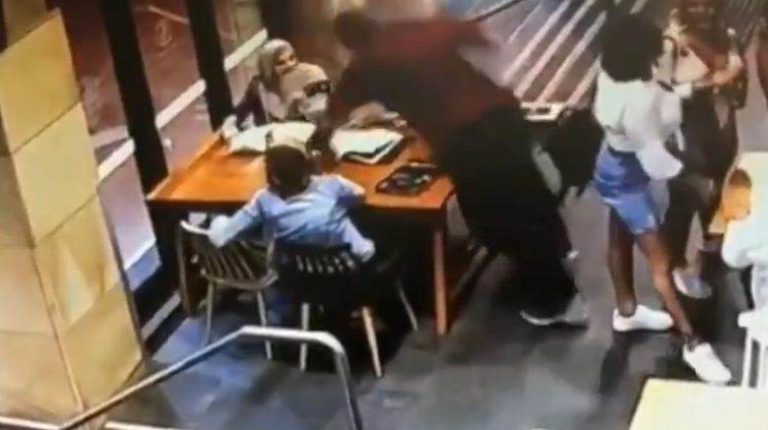 An alleged racially-motivated attack on a pregnant Muslim woman in Sydney last Wednesday shed light on the growing hostility towards Muslims in Australia in recent years.

Rana Elasmar, 31, was sitting with her friends (all veiled) at a cafe in Sydney, chatting and having a good time, a 43-year-old man suddenly approached their table, made a brief chat and then repeatedly punched Elasmar and stomped on her head before she fell to the ground.

People at the cafe intervened to get him off, her friends tried to help her, shocked by the attacker behaviour, which apparently came without any provocation.

The attack has been condemned by Islamic institutions in Australia and Egypt. The Australian Federation of Islamic Councils described the attack as “racist and Islamophobic,” adding that the attacker was heard yelling at the victim and her friends with “anti-Islam hate speech.”

Egypt’s Dar Al-Ifta condemned on Friday the attack, describing it as “abhorrent racism,” against Muslims and Islam, calling for “enacting laws that criminalise inciting hate and racist discrimination.”

Meanwhile, the CCTV footage of the attack went viral on social media, as users denounce the attack on a Muslim woman.

Australian police arrested the attacker, saying that the man was not known to the victim. The authorities said it is investigating whether the attack is racially motivated or not.

However, the victim opened up about the assault and posted a public post on Facebook on Friday. Elasmar said that she “experienced occurrences of verbal abuse and hate from other Australians in the past, but she “never thought physical abuse of this nature could happen” to her.

“It is not OK. How somebody feels like they have the right to abuse another human being baffles me. It shows a lack of humanity. It shows weakness,” Elasmar said.

“I call all Australians, Muslim or non-Muslim, of all faiths and cultures to come together, as you have already done for me and voice your solidarity in protecting innocent people from any future racial/religious attacks.”

She voiced her fears over the “world our children will grow up in if this issue is not addressed.”

“We are mothers, wives, daughters and we deserve to feel safe wherever we go. We deserve a night out to unwind without being fearful of an attack like this happening again.”

A study by Charles Sturt University which covered the two-year period of 2016-2017 showed that “Insults targeting Muslims’ religious appearance and religion was the highest in both reports online and offline, with almost all women respondents (96%) targeted while wearing hijab.”

“Vulnerable people, mostly women and children, were easy targets for perpetrators. Of the 113 female victims, 96% were wearing a headscarf (hijab), 57% were unaccompanied (in contrast to 6% unaccompanied males) and 11% were with their children at the time of the incident,” the study found.

On Muslim children, the study found that the experiences of Islamophobia start in pre-school years when they were accompanied by their identifiably Muslim parents.

“[They] continue in school years through multiple perpetrators in the school environment, such as school peers, teachers, school administration, other students’ parents or other adults targeting Muslim students on the way to school,” the study added.

The number of Muslims soared in 2016, and there are about 604,200 Muslims in Australia, 2.6% of the total Australian population according to the 2016 Australian Census.