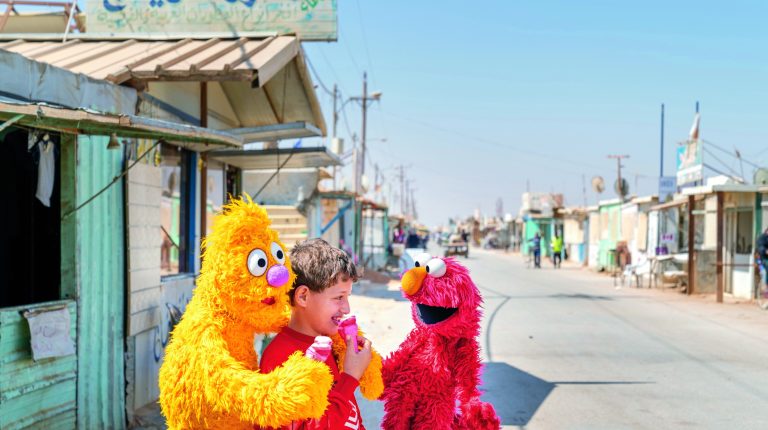 Basma – an almost six-year-old purple puppet – is to soon join forces with Jad – a bright yellow puppet that is about the same age – to share their diaries and daily life as refugees in one of the most famous children shows, Sesame Street.

The world leading kids show, Sesame Workshop, in cooperation with the International Rescue Committee will launch a new Arabic version of the programme dedicated to refugee children in the Middle East.

The show is planned to be screened in 2020, under the name of Ahlan Simsim (Welcome Sesame). The planned input is to tackle the main issues facing displaced children in their daily life, as well as educational content.

“We know how important it is for children to see their own lives and experiences reflected on-screen,” executive producer Scott Cameron said in a statement earlier this week.

Cameron further added in his statement that the children can “learn all about big feelings and how to manage them through coping strategies like counting to five and belly breathing.”

The programme is based on a number of workshops in Lebanon and Jordan “that brought together teams of early childhood specialists, play and art therapists, psychologists, linguists, writers, artists, and local IRC staff to develop the show’s curriculum and explore creative ideas for Ahlan Simsim’s characters, storylines, and songs,” Cameron added in his statement.

Ahlan Simsim aims to give the children of Syria, Lebanon, Iraq, and Jordan the chance to learn about art, pre-school curricula, and activities to overcome their struggles.

Both organisations won a $100m MacArthur Foundation award in 2017 for the plan, which involved two major initiatives: a “Sesame Street” show with Arabic-speaking characters and the development of services that reach refugee children directly, according to CNN.