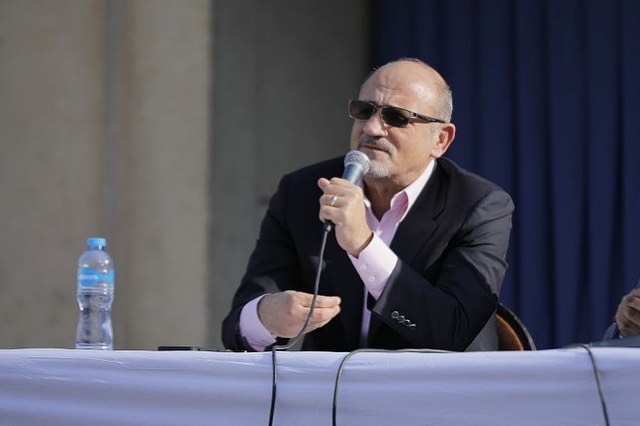 After 33 years of a long journey in filmmaking, veteran Director Sherif Arafa received the Faten Hammama award for his lifetime achievement.

During a press conference attended by several actors, writers, and filmmakers who worked with Arafa, he asserted that such an award was an honour to him.

The conference was attended by Festival Director Mohamed Hefzy who said that he grew up watching Arafa’s films, and he is happy that Arafa was honoured during my time heading the Cairo International Film Festival (CIFF).

“When I decide to make a film, my first goal is the audience. Don’t believe the director who says that success is in festivals and that receiving awards is more important than the box office’s success. I present the film to the public first before sending it to festivals,” Arafa stated.

Arafa recalled his friendship with late Director Salah Abu Seif when both used to travel abroad a lot together. Although they did not work together, Arafa said that Abu Saif gave him a valuable piece of advice. According to Abu Saif, there is no such thing as ‘realist cinema’, but there is something called the vision of the director and the drama which includes sincerity and realism.

Nevertheless, he asserted the vitality of creating films that are influenced by what is happening in society, citing his film The Island 2 which was inspired by the 2011 revolution.

With regards to the state’s returning role in supporting and funding films, he said, “We have had a long time to rely on the state. We have large production companies that can take responsibility for the industry. We ask the state to facilitate the process of obtaining permits and obtaining equipment when it comes to making films that need military equipment.”

“When cinema was nationalised in the 1960s, production declined and the industry faltered. But over time, a new generation of directors started a new wave in the film industry, such as Mohammad Khan and Atef Al Tayeb,” Arafa said, adding that artists must recognise the responsibility that the film industry has a soft power that is important for the public.

Arafa talked about his memories with the late actor Ahmed Zaki, saying he was lucky to have worked with him.

Actor Sherif Monuir also asserted his tight relationship with Arafa, adding that they were together in school and that Arafa has been long known for commitment and credibility. Monuir added that during his work with Arafa for the film Welad Al-Amm (The Cousins) in 2010, he wished for a longer shooting period because he was excited about the experience.

Director Amr Arafa, the brother of Sherif Arafa, said that his brother has always loved cinema and films.

Actress Laila Elwei concluded the panel praising the work of Arafa, saying that for him to be honoured from CIFF is a big step, and is also an honour to everyone who worked with Arafa whether an actor, actress, cinematographer, or scriptwriter. She added that Arafa through his career was able to present several genres like musicals, war, political, and comedy films.

Arafa is undoubtedly one of the most important Egyptian directors in the last 30 years, a filmmaker who belongs to the new realist wave of cinema. Till today, he directed 23 feature films, two TV series, and participated in the film 18 Days which was screened after the 2011 January revolution at the 2011 Cannes Film Festival.

Arafa is known for a very distinctive directing style, whose characteristics can be traced clearly since his first film, Al-Aqzam Qadimoon (The Dwarfs Are Coming) in 1986, through which he started his collaboration with Egyptian Writer Maher Awad, his colleague at the High Cinema Institute in Cairo.

The method, which can be described as the sarcasm of resistance, marked Arafa’s films from the late 1980s until the beginning of the second millennium. After that, he developed this and moved to modern action films. An example of that was his latest films in 2019, Al Mamar (The Passage).

Prior to his journey, he worked as an assistant director. Then he joined forces with Writer Awad. From 1986 to 1991, they made four films, including The Dwarfs are Coming, Al Daraga Al Talta (The Third Class), which very clearly combined social sarcasm and politics.

Sharif Arafa continued the journey, going through the most important stage of his artistic and creative career, the 1990s when he started working with Egyptian Author Wahid Hamed and the prominent Egyptian Actor Adel Imam. This is the stage where this trio succeeded in achieving the difficult equation, namely balancing between making top quality films which were also successful at the box office such Al-Le’b ma’a Al-Kobar (Playing with the Giants) in 1990, Al Irhab wal Kabab (Terrorism and Kebab) in 1992, Al-Mansi  (The Forgotten) in 1993, Toyour elzalam (Birds of Darkness) in 1995, and Al Noum fil ‘Asal (Sleeping in Honey) in 1996.

Since his debut, Arafa’s special ability in guiding actors has been greatly demonstrated. This has been particularly evident as he worked with some of Egypt’s most talented actors, such as Adel Imam, and Ahmed Zaki in Halim. A number of prominent Egyptian cinema stars also join this list including Yusra, Laila Elwei, Hussein Fahmy, Yehia El-Fakharany, Mamdouh Abdel Alim, and Hisham Selim.

Many actors and actresses were featured or had their debut in Arafa’s films, such as late comedian Alaa Wali Al-Din, as well as Mohamed Heneidi, Mona Zaki, Ahmed Helmi, Mohamed Saad, Ahmed Adam, Salah Abdalla, Karim Abdel-Aziz, and Ashraf Abdel-Baqi, all of whom are now main players in the Egyptian film and entertainment industry.

Though he never worked as a TV series director, Arafa produced a number of series including Tamer and Shawqia and Lahazat Harega (Critical Moments). He also directed two stage plays including the very popular Al-Zaim (or The Leader) starring Adel Imam in 1993, and High Heels in 1996. In addition, he directed numerous advertisements.

Since 2002, specifically through his films Mafia which introduced Ahmed El Sakka as an action star, Arafa has moved to a new stage, showing the passion for action films. His continuous attempt to make Egyptian action films with international standards came to the surface in the espionage film Mafia which mixes local action with nationalist cause. Similarly, in Welad Al-Amm (The Cousins), an espionage film about the Arab-Israeli conflict. Last but not least is his latest, the passage which follows an Egyptian battalion coming on a mission during the War of Attrition.