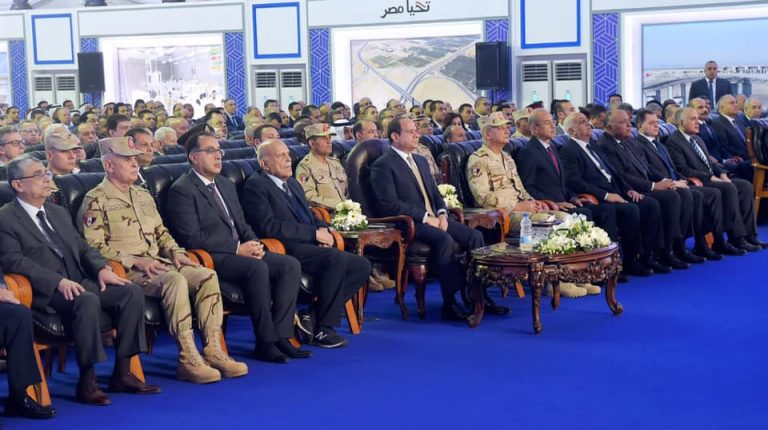 President Abdel Fattah Al-Sisi witnessed on Tuesday the opening of several national projects, including the 30th June axe, a double free 95km-long and 80-metre-wide highway, and other projects in Sinai and Port Said.

During a speech, Al-Sisi affirmed that the state is currently focusing on the health and education sectors, adding that the state facilitated 300,000 operations under the initiative to end the waiting lists in one year, at a cost of more than EGP 2bn.

He stressed the need for conducting Hepatitis C test for students before starting each school year at the expense of families at a cost of EGP 20 for the single test. He explained that the early detection of any diseases reduces the cost of treatment for the state and the citizen.

Meanwhile, the Health Minister Hala Zayed described the comprehensive health insurance system as a medical reform aimed at reducing Egyptians’ expenses on treatment, noting that fixing problems of the Egyptian health system has begun with the initiative for ending waiting lists.

Moreover, the president inaugurated via video conferencing, the first phase of the port berths of east Port Said with a total length of 5km. He revealed during the opening ceremony that the state has allocated 19,000 feddan for fish farming in the Suez Canal Economic Zone.

Al-Sisi added that the state is working on preparing the Economic Zone’s lands for attracting investors, pointing out that this will cost lots of money due to the boggy nature of the land.

“The volume of development projects implemented in the Suez Canal zone including roads and tunnels has reached EGP 150 bn,” said Al-Sisi. According to the president, the cost of establishing a single axe within the economic zone is EGP 8.8bn, adding that developing east Port Said zone was on the table for 15 years, but it was delayed due to lack of funding.

He further announced the completion of the eastern and western berths of East Port Said port with a length of 5km, revealing an increase in the reception of huge tankers by 45% in 2019.

Additionally, the president inaugurated the small and medium-sized industrial complexes in southern Al-Raswa in Port Said via video conferencing.

Magdy Ghazi, head of the Industrial Development Authority, said that the new South Raswa project will provide many job opportunities for young people.

He added that the implementation of the main initiative for employing  youth has been started by the establishment of 16 industrial complexes, that provide 4,812 industrial units with a total investment of EGP 12bn. The complexes were constructed in two phases by civilian companies under the supervision of the Armed Forces Engineering Authority.

The target sectors of the project are food, engineering, chemical industries, ready-made clothes, and textile.