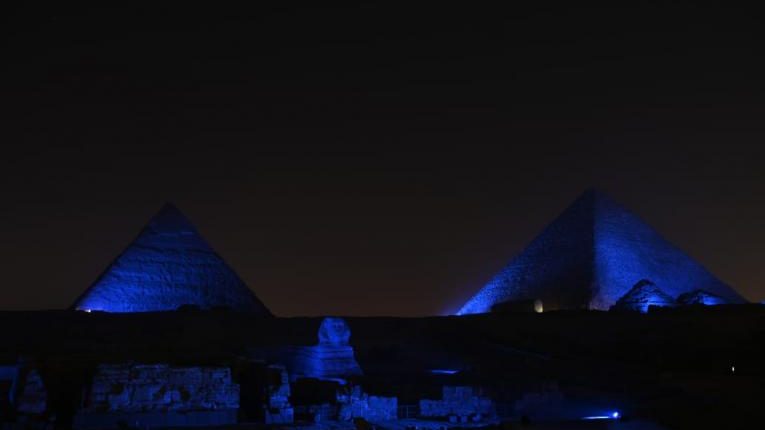 Overlooking the newly blue Pyramids, UNICEF celebrated on Monday Egypt’s 30th anniversary of the Convention on the Rights of the Child, highlighting the country’s achievements has made in terms of child protection rights.

The celebration was attended by Tarek Shawki Minister of Education and Technical Education, and Azza El Ashmawy, the Secretary General of the National Council for Childhood and Motherhood. This is along Ivan Surkoš, Head of the European Union Delegation to Egypt, and actress and Singer Donia Samir Ghanem, UNICEF Egypt’s Ambassador.

The event witnessed joining the global movement “Go Blue for every child” by turning the Great Pyramid, the Pyramid of Khufu, a wonder of the Ancient and the Modern times, into blue as a symbolic stand for child rights.

Maes, in a speech about the efforts his organization made for Egyptian youth over the years, said “Between 1992 and 2014, the neonatal mortality rate has decreased by 58% and the under-five mortality rate by 68%. In terms of nutrition, the use of improved drinking water sources has increased by 11%.”

For his side, Surkoš highlighted the role the EU has played in empowering children and standing against all sort of cultural beliefs that deprive them from their rights.

“The EU has cooperated with Egypt over the past years to support children’s rights to education, health, participation, protection from violence and equality. Especially gender equality, he said, adding “the EU is one of the main supporters of the elimination of Female Genital Mutilation, the right of children to education, and stopping child labour.”

He added that such “efforts reflect a strong commitment on our part, and we are keen on working together with the Egyptian government, development partners, and civil society to promote children’s rights.”

The event witnessed the inauguration of an exhibition for some of the children’s paintings and handicrafts, as well as musical and theatrical performances.

Topics: child Convention on the Rights of the Child pyramids UNICEF