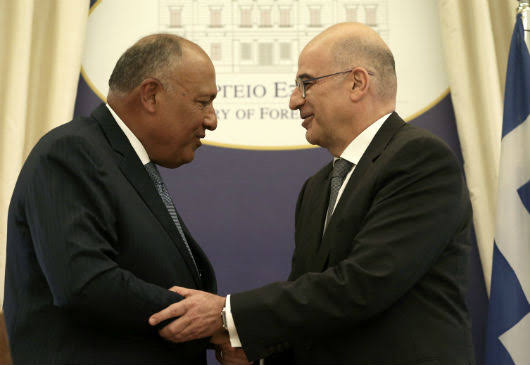 Egyptian Foreign Minister Sameh Shoukry will receive his Greek counterpart Nikos Dendias on Sunday in Cairo to discuss the developments in the Eastern Mediterranean area and the agreement singed recently between Turkey and Libya’s UN-backed government, according to the Greek Foreign Ministry’s Saturday statement.

Egypt and Greece condemned the recently signed memorandums of understanding (MoUs) between Turkey and the Prime Minister of the Libyan Government of National Accord (GNA), Fayez Al-Sarraj, considering the move as a violation to international law.

Political Science Professor at Cairo University Tarek Fahmy told Daily News Egypt, “The memorandums, which come at this delicate time, is aimed at sending an important message to Egypt, in which Turkey warns Egypt by approaching Libya.”

Escalating the already tense situation in the Mediterranean region, Al-Sarraj had signed an agreement with the Turkish president Recep Tayyip Erdogan in the field of security cooperation and maritime jurisdictions.

He explained that the proactive moves include opening Mohammed Naguib base in the western governorate of Matrouh, signing the Maritime Demarcation Agreement between Egypt and Cyprus, and founding the Eastern Mediterranean Gas Forum.

The two MoUs were considered by the Egyptian Ministry of Foreign Affairs as an illegal non-binding agreement, and does not affect the interests and rights of any third parties.

Commenting on the memorandums, the ministry stated that the agreement has no implications on the rights of the riparian states of the Mediterranean Sea, and does not affect the maritime boundary delimitation system in the Eastern Mediterranean region. It also asserted that the agreement cannot be recognised as “the Council of Ministers is an entity, and the President of the Council alone has the power to conclude international agreements.”

It also noted that the Council of Ministers’ membership is clearly incomplete, and currently suffers from a serious imbalance in the representation of Libyan areas. Accordingly, the restricted role of the Prime Minister is limited to steering the Council’s affairs; all attempts to build legal arrangements with any other country is a serious breach of Libya’s Skhirat Agreement, the ministry explained.

“Egypt urges the international community to assume its responsibilities in facing this negative approach, which comes at a very delicate time,” said the statement, expressing Cairo’s concerns over such negative developments, affecting the Berlin political process to reach a comprehensive and enforceable agreement based on addressing all aspects of the Libyan crisis.

Asked if the memorandums would affect international efforts to solve the Libyan crisis, Fahmy affirmed that they would postpone the Libyan settlement because such agreement will add a new party (Greece) in the Libyan crisis, which would further complicate the situation, he asserted.

“The Libyan crisis has branched out, moving from the regional framework to the international framework. However, we cannot say whether or not the agreement disregards Crete autonomy as the agreement itself has not been officially published,” however, he continued “We cannot say that the memorandums are illegal because the GNA is widely recognised by the international community as a government, so signing this agreement would be well within their authority.”