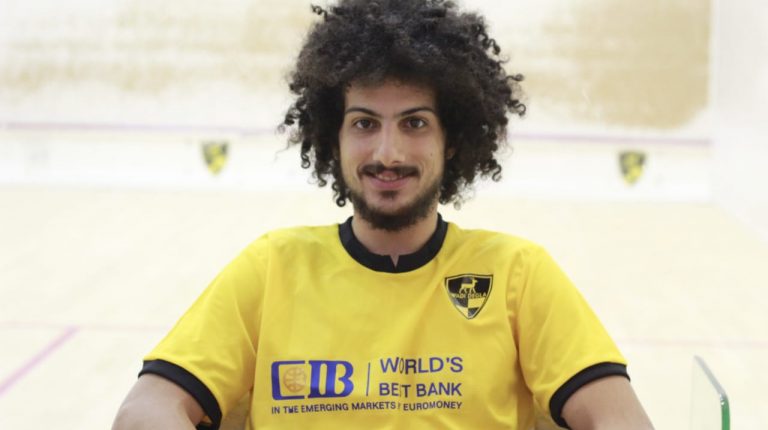 Wadi Degla SC is planning to sign promising squash players who showed great potential since their childhood. The club offers quality training under coach Karim Darwish. All these efforts are in partnership with the Commercial International Bank (CIB). Daily News Egypt interviewed two promising talents in the club, Mazen Hisham and Mayar Hany, to learn more about their future plans in the game.

Can you tell us about your start in squash?

I started practicing squash at the age of seven. My brother played squash before I did. This encouraged me to play it like him, and I liked it.

At the age of 10, I started winning local championships. At the age of 13, I began to participate in junior foreign championships, and later when I was 17, I played in the World Junior Squash Championship where I ranked third. Afterwards, I won several competitions, and began to develop my world ranking. I became involved in men’s tournaments. I must point out that not everyone is special in the junior stage. Players experience various situations. Sometimes you win and sometimes you lose, but it is important to continue until you succeed. You may work very hard and reach a high level, but then find yourself in a situation during a match that may cause you to lose.

Squash is an expensive and unprofitable game, but this situation changes over the time. As you advance in the ranks and win competitions, it turns into a profitable game and you get sponsors and prizes. You can say it is profitable only for the top-30 ranked players internationally.

What clubs have you played for?

I played for many clubs, such as Al-Shams, Al Ahly, Al-Zouhor, and finally Wadi Degla. I always transfer because of the change of the coach or for a higher offer at a different club.

How was your experience in Wadi Degla?

I have joined Wadi Degla five years ago and my contract expires in June 2020. As a professional player, it is very important for me to be paid appropriately and on time. They give players enough time for proper practice and they provide you with anything you need. If I want to play a friendly with any player from outside the club, there wouldn’t be any problem. All these things make me satisfied with the club.

What is the value of your contract with Wadi Degla?

The value of my contract is very satisfying. I’m very happy in Wadi Degla. The club has turned into a big brand around the squash world. Abroad, they ask me for the club’s shirt.

Do you have your own sponsor?

My personal sponsorship contract does not belong to the CIB, but the bank sponsors the club. It offers us the chance to participate in overseas competitions. It is the best squash sponsor in Egypt.

What about your world ranking?

I now ranks 19th in the world, and I am trying to improve that. I ranked 13th before, but I suffered a severe injury that prevented me from playing for a while, so my ranking dropped to 70th. It wasn’t until recent that I started to make a comeback.

You went through hard situations during your career, can you tell us about the most difficult one?

Unfortunately, I was injured during my career peak. It happened at the Men’s Qatar Classic 2015. At the time, I beat Ali Faraj, the world’s number one now, and made it to the semi-finals. That injury changed everything in my life. I could have become the best player in the world at the time. I was young and the opportunity was great.

What does the Egyptian Squash Association (ESA) offer to you?

The ESA offered me the treatment after my injury. Thanks to their efforts, the Egyptian squash ranked number one internationally.

Have you played for any foreign club?

I played in England for a while. I made good profits there, but Egypt is the best in the world when it comes to squash, so playing in Egypt is better.

What about your personal life?

It is normal. My social life is not that great because of constant playing and traveling abroad. Squash takes all my time. One day, I will get married and start a family, but I will not marry a squash player. I can’t make my personal life and my job the same thing. As for studying, I’m in my senior year at the Arab Academy For Science, Technology & Maritime Transport. How was your start in squash?

I started playing squash at the age of six. My brother and Mazen Hisham, who is also a family member, played squash before I did. Most of the family was playing squash at the time, so it was normal for me to play squash. At the beginning, I achieved positive results. I won many matches at Al-Shams Club and found great encouragement and support from my family.

During the junior stage, I always ranked first or second in Egypt, and I participated in the British Junior Open Squash where juniors aged 11-19 get to play. I was always among the top five players in that age in Egypt.

I participated in the WSF World Junior Squash Championships at the age of 19 and ranked 8th. Three years ago, I ranked 23rd in the world, but later I dropped to the 30th place now. I’m participating in eight tournaments in the coming year.

What clubs have you played for, and what makes Wadi Degla different?

I Played for Al-Shams Club and Al Ahly. I was trained by coach Karim Darwish in Wadi Degla. He does not only support me in the game, but he also gives all of us the required emotional comfort.

What about your contract with the club?

My contract with Wadi Degla is renewed annually, and our contracts as females do not differ than men’s. They are valued according to the global rankings of each player. Those who are in the top 10 receive higher contracts. To me, my contract is very satisfying. I will certainly continue with the club.

Do you have your own sponsorship?

IS squash profitable for you?

Do you feel like squash has deprived you of the things you should be doing at your age?

Squash is the most important thing to me, perhaps it has deprived me of some things, but I certainly try to have a balance in my life.

Do you think of getting married and starting a family while playing squash?

What is your ambition in the game?

I aim to reach the highest possible ranking in the world. I always do my best.

You have a special relationship with world’s number one Raneem El Weleily, can you tell us about it?

Raneem El Weleily is my idol, both in the game and life. I learned from her that morality comes first, and through it, you can reach anything. She is a role model in everything.

What are the most difficult situations you have experienced during your career?

Squash is a difficult game, sometimes you play and you lose, so it is necessary to be patient.

Is there a difference in the competition strength between men and women?

Men’s competitions are much better than women in squash, there can be no comparison, however, the presence of El Weleily and Nour El Sherbini gives great strength to the women’s squash competitions.