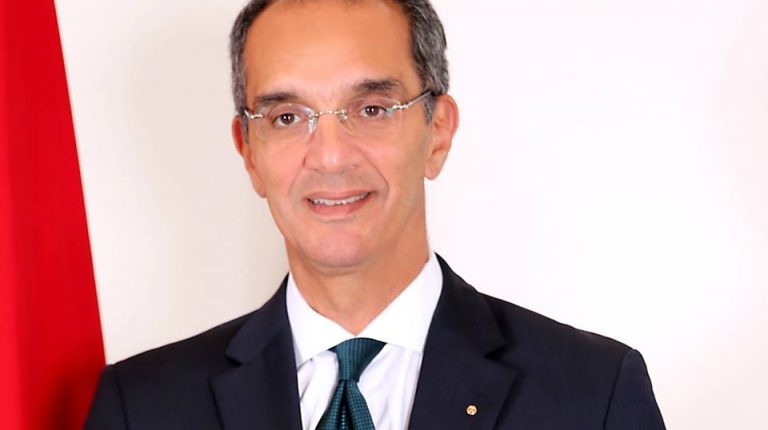 The Ministry of Communications and Information Technology aims to take the contribution of the sector to the gross domestic product (GDP) to 8% within the next three years up from 4% currently, through increasing digital exports and expanding the digitisation of government services within the state’s digital transformation plan.

On the occasion of the Cairo ICT conference and exhibition, taking place 1-4 December at the Egypt International Exhibition Center (EIEC), Daily News Egypt interviewed Minister of Communications and Information Technology, Amr Talaat, to know about the progress of Egypt’s digital transformation and the new services and plans of the ministry.

Digital transformation is Egypt’s priority now, what are the ministry’s efforts in this regard?

Digital transformation of Egypt is a priority for the Ministry in the coming period.

We cooperate with all ministries and government agencies in establishing an integrated digital society.

The President always stresses the need to rely on technology to improve the lives of citizens, which drives government agencies to focus their efforts on digital transformation projects.

What will the government agencies exhibit at the Cairo ICT 2019?

We should know that technological development is not the responsibility of a particular ministry. Several ministries and government agencies will participate at the Cairo ICT this year.

At the ministry and affiliated entities’ pavilion, we will showcase the government services that have been automated or under automation.

The pavilion will include the ministry’s entities, mainly the National Telecommunications Institute (NTI) and the Information Technology Institute.

What does President Abdel Fattah Al-Sisi’s sponsorship of the event represent?

President Al-Sisi’s sponsorship of the Cairo ICT 2019 sends a strong message to the world about the importance of the sector’s role in achieving the country’s sustainable development strategy and Egypt 2030 vision.

Of course, many African countries are keen on participating in this exhibition every year.

During thus edition, African communications ministers will hold their first meeting to discuss developing a common strategy on artificial intelligence (AI) technology across the continent, a proposal made by Egypt during the African ministerial meeting in October in Sharm El-Sheikh, where eight countries have already joined and an initial draft of the strategy was written.

What are the growth rates of Egypt’s telecommunications sector?

During the first quarter of this fiscal year, the telecommunications sector grew by 16%, while its contribution to the GDP was 4%, which will reach 8% over the next three years.

What is the value of Egypt’s digital exports?

We aim to increase this figure by 10% by the end of FY 2019/20. In addition, last year saw the establishment of 1,500 new companies in the sector, which reflects the growing awareness of the importance of the sector.

You mentioned that digital transformation is the priority of your ministry, what are the axes of the ministry’s plan in this regard?

Our plan includes raising the state’s digital exports, qualifying human resources through special training programmes, and creating new job opportunities in the digitisation projects of government services. We also study the global developments of modern technology and how to benefit from them, including AI, Blockchain, and Internet of Things (IoT).

This happens through several initiatives, including the establishment of Mahara Tech, an online learning platform which offers high-quality courses authored by ITI, Mahara Tech provides 170 hours of online lectures on technology for free, followed by a test and granting a certificate from international companies, which the ministry bears its cost.

Anyone who obtains this certificate can work in any digital company inside or outside Egypt. Moreover, there are initiatives that the ministry works on, in cooperation with international companies involved in the implementation of the digital transformation of the country.

The ministry also trains secondary school students on programming sciences, in addition to qualifying military recruits in cooperation with the Ministry of Defence, especially engineers, for the labour market after the end of their military service.

Moreover, we cooperate with the private sector and freelancers working in Egypt or abroad who are part of the country’s digital exporters.

What are the most prominent government services that the ministry has automated during the last period?

The ministry has completed the automation of several government services in cooperation with various ministries. We aim to launch digital traffic services, documentation, and ration cards for all citizens by the end of January 2020.

We are working on the launch of Al-Falah bank card, one of the most important projects that the ministry is preparing in cooperation with the ministries of agriculture and military production.

The project aims to help farmers access all the services supported by agricultural cooperatives. This project includes the inventory of all agricultural lands to identify the needs of farmers, to better support them and rationalise spending. The card will be linked to all state institutions.

We will also generalise the experience of Port Said as the first digital city in the country.

Port Said was transformed into a digital city by connecting 800 government agencies by fibre optic network to ensure better digital government services to all citizens.

It is scheduled to link all government agencies nationwide electronically and make their services available online within 30-36 months at a cost of EGP 6bn.

Recently, the government agreed to establish a national council for artificial intelligence, what does this mean?

It is a new idea that has been discussed since the beginning of the year and aims to develop a national strategy for artificial intelligence in line with global developments.

Prime Minister Mostafa Madbouly has issued a decision to establish the council and to be chaired by the Minister of Communications and Information Technology. It will also coordinate with various sectors to implement the goals of the digital transformation strategy.

The new council has an executive office headed by the Minister of Communications and Information Technology or his delegate, in addition to eight experienced members nominated by the council’s members.

The executive office shall supervise the implementation of the council’s plans, and prepare the necessary study for the organisational structure and executive management of the council.

Recently, the National Telecom Regulatory Authority (NTRA) fined two telecommunication companies which has never happened before, how do you see this incident?

The NTRA has applied the terms of the licenses granted to those companies transparently and the penalties have been determined according to the number of affected customers, the hours of the service cut, and where they occur.

The NTRA fined Vodafone and WE for malfunctions in their networks by EGP 10m on Vodafone in July and EGP 12m on WE in October.

Does this mean the mobile service quality will improve soon?

Improving the quality of mobile service takes time by building cellular base stations, renovating cables, and communicating with operators to fix malfunctions in networks.

Over the past period, the global Internet bandwidth has been doubled at a cost of $20m. The efficiency of telephone exchange centres has also been increased by 260% at a cost of $400m, as well as 33,000 smart grid sensor data collection units at a cost of $650m.

Over the past 14 months, Telecom Egypt has invested $1.6bn in upgrading its Internet infrastructure. The service speed has been increased three times, and we plan to bring the Internet speed to 20 Mbps before the end of this year.