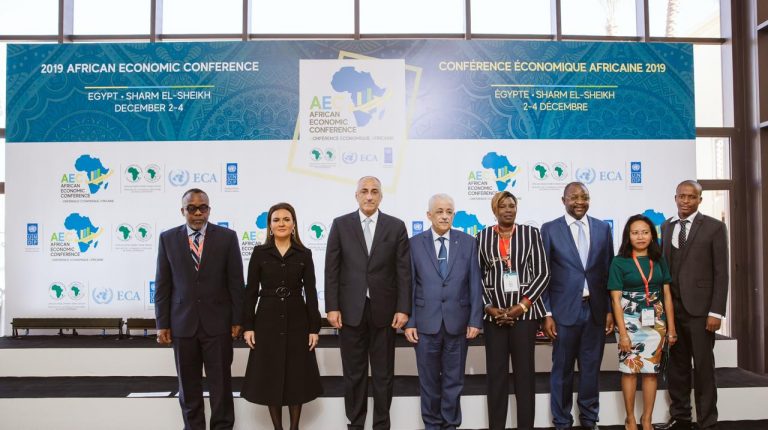 Sharm El Sheikh –The 14th African Economic Conference (AEC), which kicked off on Monday in Sharm El-Sheikh, Egypt, urged African countries, international organisations, and institutions to work together to achieve sustainable development for the African continent, provide job opportunities for young people, and invest in the future.

More than 350 stakeholders are converging on Sharm El-Sheikh to participate in the 2019 AEC, with this year’s focus on jobs, skills, and capacity development for Africa’s youth.

In his speech on behalf of President Abdel Fattah Al-Sisi, the Central Bank of Egypt (CBE) Governor Tarek Amer stressed the importance of capacity development among young people since the issue concerns all decision-makers in the continent, as job creation is linked to many issues.

“In Egypt, we had a special experience based on an integrated vision of the political leadership, to overcome the country’s challenges. Unemployment rates were up to 13%, in addition to chaos, political turmoil, increasing inflation, while the rate of growth did not exceed 2%. The President’s vision has contributed to reducing such challenges and overcoming them as soon as possible.”

He explained that the Egyptian government is now working to encourage micro, small, and medium enterprises (MSMEs), support policies to access all financing projects and restructuring, and support the Egyptian banking sector to finance small projects. He added that the CBE has already supported the initiative to encourage entrepreneurs.

Amer said that the CBE has launched several initiatives to support Small and medium-sized enterprises (SME)s, encourage entrepreneurship and job creation, and has succeeded in its initiative to support interest on loans directed to small enterprises that led to the creation of 100,000 new micro-projects.

“It is no surprise that youth employment is one of the highest development priorities. A concerted effort of government policies, as well as a stout involvement of the private sector, are required to spark such changes,” said the African Development Bank’s Acting Vice-President for Economic Governance and Knowledge Management and Chief Economist, Charles Lufumpa, who is leading the Bank’s delegation to the Conference.

“Poverty should end from Africa,” he said in his speech, which was applauded by the audience.

“It is troublesome not to provide the continent with the needs of jobs. Unemployment threatens our social fabric, especially as access to a decent opportunity is part of human dignity. Unemployment pushes young people to join terrorist organisations. Everyone should support the initiative to create 25 million jobs by 2025,” he added.

Luftama also elaborated that more than 12 million young Africans migrate from their country to look for work.

Raymond Gilpin, chief economist and head of the strategy at the regional bureau for Africa, UNDP, said that creating jobs and raising the skills of young people is a major challenge to the continent.

In his speech, Adam Elhiraika, Director of the Macroeconomic Policy Division of the United Nations Economic Commission for Africa, said that climate change, lack of jobs, and declining technology are affecting society and the future of the continent.

He explained that Africa has opportunities and possibilities to lead development in the world, especially through working with the African Union to achieve the future goals of the African continent, especially as nearly 60% of the African population is under 25 years of age. Providing them with decent jobs is one of the most important challenges in Africa and more than 10m new jobs must be created every year to keep pace with the growth of the workforce.

Professor Hilmar Schneider, CEO of the Institute of Labour Economics, addressed the tasks of the institute, stressing the need to invest in the future, avoid discrimination, and address all forms of corruption.

He added that families should be able to provide enough to guide children to schools instead of early labour in factories, agricultural fields, and production units and work to reach better consumption and exploitation of resources.

Minister of Investment and International Cooperation Sahar Nasr said that 62% of Africans are young people, which requires attention to their problems. She also stated that Africa was one of the continents most affected by the low rates of foreign direct investment.