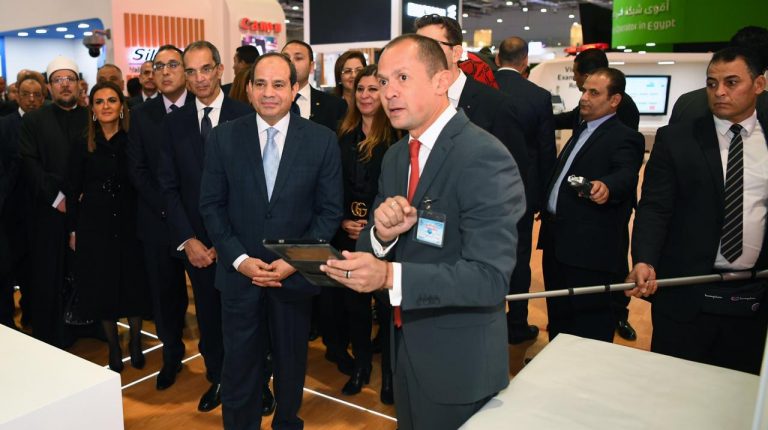 President Abdel Fattah Al-Sisi’s participation in the Cairo ICT conference for the fifth year in a row signifies the importance of the ICT sector, placing a huge responsibility on the government and the private sector, Minister of Communications and Information Technology Amr Talaat said.

In his speech at the opening of the Cairo ICT, Talaat congratulated the President on the successful launch of the first Egyptian satellite dedicated for telecommunications “Tiba 1”, through which high-speed internet services can be provided in Egypt and several African countries.

The minister pointed out Egypt’s digital transformation is not limited to digitising government services, but also fortifying communication services provided to citizens.

In this context, the ministry is keen on integrating advanced technologies such as artificial intelligence (AI) and activating its applications in national strategy decision-making. This is the result of fruitful cooperation between the Ministry of Communications and Information Technology and the Ministry of Higher Education.

The digital transformation strategy includes creating a base of AI and data science specialists, in addition to the establishment of a centre for AI applications and computing through which major international companies may cooperate in joint projects in the areas of health care and agriculture. These applications may help in diagnosing and detecting diseases, solve water scarcity issue, and machine translation.

In his speech, Talat said that the ministry is preparing many training programmes to build digital competencies to enhance the country’s competitiveness in regional and international markets and meet the local requirements of the ICT industry.

The number of trainees in ICT sector will increase from 4,000 to 13,000 youth by the end of this year, Talaat revealed.

He stressed that the ministry’s focuses on innovation, as it works to expand the base of youth benefiting from support programmes and sponsorships of technological innovation, and embraces creative ideas while developing them into value-added products through the deployment of technology parks.

One year after the establishment of 1,500 new companies, and the growth of investments in small and medium enterprises (SMEs) by 23%, Egypt now ranks second in the Middle East and North Africa in terms of attracting investments to startups operating in the field of technology.

According to the minister, occupancy rates from private companies in the technology parks of Borg El-Arab and Assiut grew to more than 60% in a year.

Regarding the City of Knowledge project, Talaat said the ministry is cooperating with the Armed Forces to build Knowledge City in the New Administrative Capital. The first phase of the project will cost EGP 2bn. It will be a specialised centre in applied research in the field of modern technology.

Also, the first specialised university for telecommunications and information technology in Africa and the Middle East is currently being built in cooperation with the Ministry of Higher Education. This is the most important project in the Knowledge City that enhances Egypt’s digital capabilities and stresses its regional leadership in this field.

The minister also announced the establishment of the Technical Center for Distress Services for People with Special Needs as the first centre of its kind in the Middle East and Africa, which will enable people with hearing and speech disabilities to communicate with emergency services.

The average internet speed in Egypt has tripled from 5.7 Mbps in June 2018 to 18 Mbps in November 2019, and by the end of this year it’s expected to reach average 20 Mbps with investments of $1.6bn, in less than two years, the minister said.

Talaat also reviewed the indicators of the telecommunications and information technology sector, where it recorded a growth rate of 16%, the highest growth sectors of the country. The total value of investments in the sector during the same year increased from EGP 28bn to EGP 35bn, an increase of 25%, in addition to increasing the volume of digital service exports from $3.2 bn to $3.6bn.

6 technology parks to be completed this year: CIT Minister