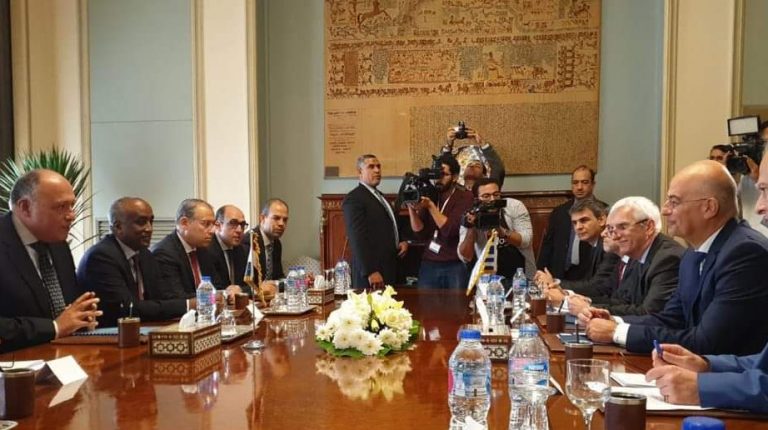 Egypt’s Foreign Minister Sameh Shoukry received on Sunday his Greek counterpart Nikos Dendias, during the latter’s visit to Cairo, according to the Greek ministry.

Both ministers discussed the updates on the Eastern Mediterranean in light of the agreements signed last week between Turkey and Libya’s United States backed-Government of National Accord (GNA).

The ministers also held talks in the presence of two delegations from both countries with a focus on developments in the Eastern Mediterranean and bilateral relations.

Earlier, Egypt’s foreign ministry said that the pair will discuss enhancing cooperation and issues of common interest as well as recent developments in the region.

In an interview with Greek newspaper To Vima on Sunday, Dendias affirmed that Greece exercises sovereignty over its maritime zones, which are also European maritime zones under international law, as reflected in the United Nations Convention on the Law of the Sea (UNCLOS).

Dendias added that Greece repeatedly raised this issue with several other states in the region, such as France, Italy, and Egypt.

Such unlawful initiatives not only harm Greece, but they will harm the relations of the states involved with the EU, Dendias added.

The two memorandums of understanding (MoUs) on maritime boundaries, security, and military cooperation between Turkey and GNA have sparked Mediterranean tensions and were condemned by Egypt, Cyprus, and Greece.

Turkish President Recep Tayyip Erdoğan on Saturday said that the deals will come into effect with all its articles. Erdoğan added that the new MoUs “protect Turkey’s rights in the Mediterranean under international law.”

“Turkey’s continued infringement, sometimes in the form of threats or sometimes with violations of international law, undermines the stability and interests of all peoples in the wider region” the ministry said.

Last month, the EU adopted sanctions on Turkey over its illegal gas drilling in Cypriot waters.

Tensions have been escalating in recent months between Turkey and Cyprus because of Turkey’s unauthorized drilling in the Eastern Mediterranean.

Egypt kept warning Turkey from drilling in Cypriot waters, affirming several times its support to the country’s rights and sovereignty over its Eastern Mediterranean resources under international laws.

Turkey supports the GNA, an interim government formed in Libya under the terms of the Libyan Political Agreement signed in 2015 and headed by Fayez Al-Sarraj.