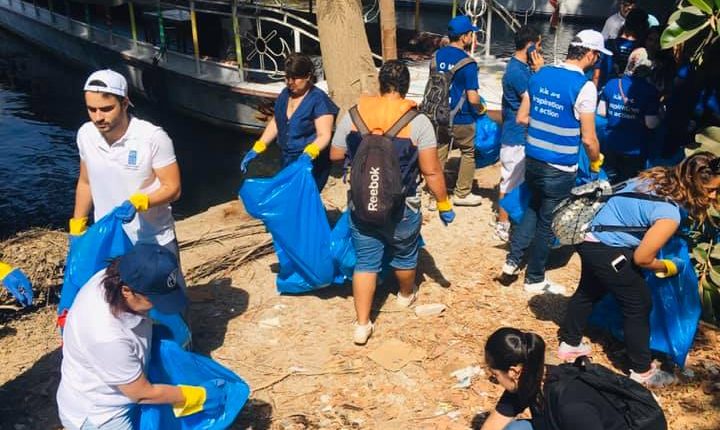 Egypt’s biggest plastic cleaning campaign, Verynile, concluded this week in Luxor, after roaming five governorates and removing over 9.5 tonnes of single-use plastic from the Nile, the Red Sea, and Mediterranean shores.

The initiative kicked off earlier this year, with the support of several embassies and ministries.

Verynile is launched by Bassita, a click-funding initiative known for its social media awareness campaigns, in partnership with Greenish, a business aiming to implement sustainable environmental solutions. The campaign seeks to revitalise Egypt’s water shores, and make it healthy again by removing all the trash that has contaminated the river for decades, and get rid of all the industrial waste putrifying it.

Seif El Ashkar, a member of Greenish’s communication team told Daily News Egypt that the volunteers collected around 1.5 tonnes from all the governorates they roamed, except for Alexandria which they collected 3.5 tonnes from the two public beaches, Al-Dekheila and Baharay.

Over the past 11 months, the campaign started in Cairo, moving to Alexandria, Minya, Sharm El-Skeikh to end its tour in Luxor, where more than 50 volunteers in addition to workers from local bazaars and tourist boats that helped remove plastic trash from the Nile and the streets.

Under the slogan of “Plastic Bah” (No More Plastic), the campaign conducted several public awareness sessions, through which they explained the damage single-use plastic products have on the environment.

In Minya, more than 100 volunteers took part in a few-hours cleaning campaign, removing over 6000 pieces of plastic waste. While in Dahab and Sharm El-Sheikh, the volunteers collected nearly 20 bags of underwater garbage.

Surfing the Nile on bicycles