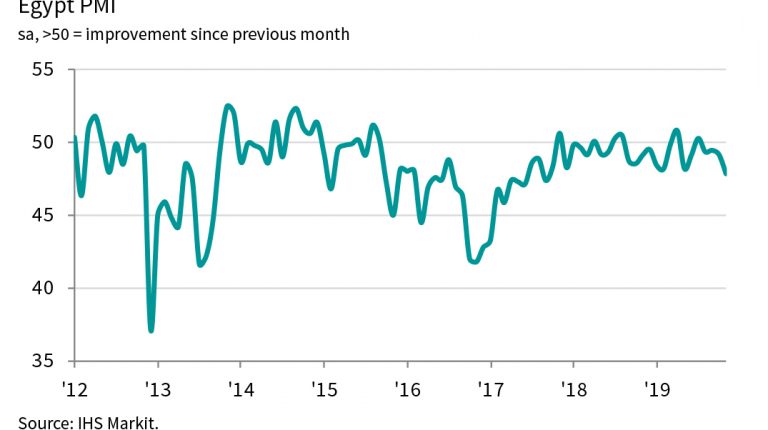 Egypt’s non-oil private sector’s activity shrank for the fourth consecutive month, reaching 47.9 in November, down from 49.2 in October, which is still below the 50 mark, signalling a growth in business activity, according to the Emirates NBD-Egypt Purchasing Managers’ Index (PMI).

This is considered the lowest reading since September 2017.

Former Executive Director at the Egyptian Center for Economic Studies (ECES), Sherif El-Diwany attributed that since the bold economic reform programme that Egypt embarked, the focus was to increase the government’s income through increasing taxes with the aim of trimming the budget deficit.

He told Daily News Egypt that only the formal sector paid the taxes, thus the main impact for this tax policy is the lack of liquidity in the corporates’ and persons hand, which subsequently contracts the domestic consumption. Thus, the companies reduce their productivity, due to the low demand and subsequently the economy is contracted.

“We were hoping after the pound flotation for Egypt to witness a high rates of exports, but unfortunately, this did not, as Egypt’s exporting rates decreased and the private sector’s activity contracted,” he explained.

“A continued market slowdown led to solid drops in output and new orders, as well as the first fall in employment since July. Businesses responded with the fastest reduction in output charges in the series’s history,” the PMI report declared.

The report stated that the output contracted for the fourth consecutive month. Moreover, the rate of decline strengthened to a solid pace, as businesses sought to limit activity due to a drop in new orders.

The output sub-index dropped to 46.6 in November, down from 48.6 in October. Meanwhile employment declined to 48.3, down from 50.7, its lowest since May following three months of growth.

The report attributed the fall in employment for the first time in four months in November to the lack of new business, in addition to several firms either reducing their workforce numbers or saw employees leave for other opportunities.

“This led to an eighth successive monthly rise in backlogs, although the latest increase was marginal as falling demand eased pressure on capacity,” it continued.

At the same time, the report showed that purchasing activity improved for the first since July, albeit only slightly. Stocks also grew, as some businesses anticipated future sales.

“Vendor performance continued to strengthen, though the rate at which lead times increased was marginal and was the softest in four months,” according to the PMI report.

Looking ahead, the report stated that the future sentiment decreased slightly in November, falling below the average for the series.

That said, it remained positive overall, with a high proportion of firms expecting output to rise in the coming 12 months. Companies predicting a decline commented that they expect the current slowdown in market conditions to linger.

Commenting on the latest survey results, David Owen, economist at IHS Markit, said the IHS Markit Egypt PMI dropped to 47.9 in November, its lowest reading in over two years, as businesses highlighted concerns over the domestic economy and new business declined for the fourth consecutive month. The downturn was extended to foreign orders, with firms noting weaknesses in key export markets.

On a positive note, he stated that inflationary pressures continued to ease, with the latest mark-up in input costs being the second-softest on record, explaining that this allowed companies to raise input buying and also lower selling prices for the first time since May.

“The drop in charges may see some demand restored in future months,” he expected.

When asked about when the reading can raise again or grow more than 50 points which signals growth, El Diwany stated that the reading will rise again if the government puts increasing the exports on the top of its priorities, stating that the foreign trade policy is in need to a full review, decreasing the pull over control policy that Egypt adopted.

He further explained that the pull over control policy that the country adopted focuses on limiting imports which is not beneficial.

He further explained that Egypt needs to open a diversified sector for private investments and for exporting.