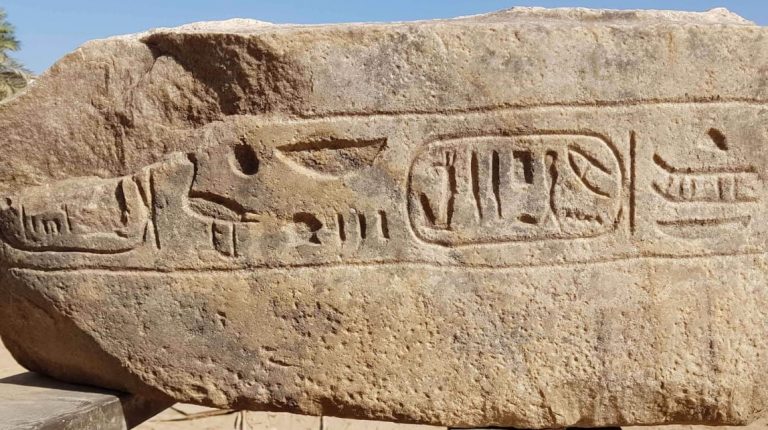 Among the unearthed antiquities were also a number of moulds for shaping Amulets, as well as blocks made of brick that were most likely a workshop of brewery and the residential area of its workers.

The ancient royal gems of the working-class district of Matariya, refuses to be buried away from people’s eyes, even when covered for centuries with layers of sand and mud. An Egyptian-German archeological mission managed to unearth a number of blocks from the royal colossi at the Heliopolis Temple, according to state owned media outlet, Al-Ahram Online.

The blocks include a giant mud brick with engravings dating back to the New Kingdom. The mission is directed by the Ministry of Antiquities, the Georg Steindorff Egyptian Museum of the University of Leipzig, and the Applied Sciences Mainz University.

The whole district of Matariya is known to be one of the most extremely rich archaeological sites in Egypt, filled with thousands of royal antiquities that date back to various dynasties from the Old and New Kingdom.

Ayman Ashmawi, the head of the ancient Egyptian Antiquities Department at the Ministry of Antiquities said in a statement that the discovery is a part of the mission’s 13th excavation season, in which they dig in the temple southern the industrial workshops.

Throughout the excavation, the mission found a graveyard buried one metre beneath the ground water which is known for covering the whole area.

Ashmawi asserted that the mission found a number of New Kingdom pottery vessels, and a number of Hellenistic period pits that included a number of inscriptions depicting Ramses II. A large brick was found inside a pit with engravings showcasing the pharaoh kneeling in front of the sun god Ra-Horakhty, known as the great god, lord of the sky, and ruler of Heliopolis.

Numerous temples dedicated to Egypt’s sun gods, particularly the chief god Ra, were built in ancient Heliopolis. But little remains of what were once the ancient Egyptians most sacred cities since much of the stone used in the construction of the temples was later plundered. The area, close to the modern districts of Ain Shams and Matariya, is now covered with residential neighborhoods.

A group of brown quartz royal statues were also unearthed in the site. One of the statues was found buried in another pit presenting King Seti II (1200 – 1194 BC). The second discovered statue belonged to goddess Isis, the queen of Ramses II. The red granite statue was found well conserved.

Among the unearthed antiquities were also a number of moulds for shaping Amulets, as well as blocks made of brick that were most likely a workshop of a brewery and the residential area of its workers.

According to Al-Ahram Online, the mission also managed to unearth large debris close to an enclosure wall from the New Kingdom containing fragments of a Middle Kingdom royal statuary as well as a variety of moulds for the manufacturing of faience amulets and fragments of reused capitals of palm columns dating back to the Old Kingdom.

“It came as a surprise that these layers directly overlay a stratum of the prehistoric settlement of Heliopolis,” Ashmawi told Ahram Online.