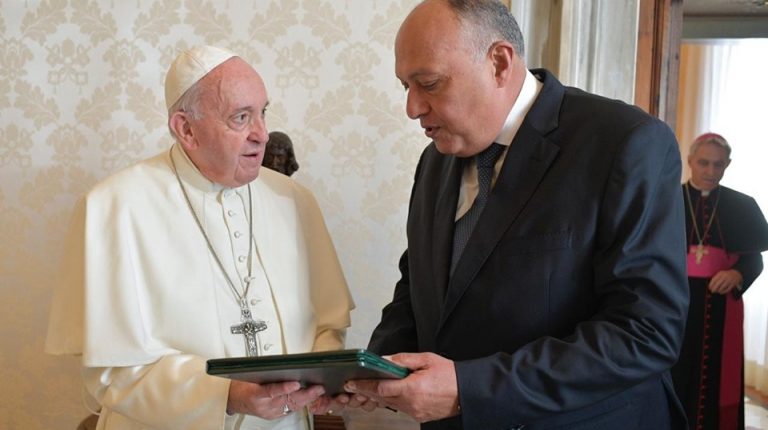 Egypt’s Foreign Minister Sameh Shoukry met on Saturday with Pope Francis, as the minister concluded his visit to Rome which started on Wednesday last week and included extensive activities.

During the meeting, Shoukry delivered a message from President Abdel Fattah Al-Sisi to Pope Francis. The message expressed Egypt’s appreciations for efforts of the Vatican to spread tolerance, mercy, and justice as well as revealing Cairo interest in enhancing bilateral cooperation.

Earlier on Thursday, Shoukry met with his Italian counterpart Luigi Di Maio as they discussed boosting bilateral relations and recent updates in the Middle East, with a special interest in the Libyan crisis and the Grand Ethiopian Renaissance Dam issue.

The pair also asserted their commitment to the continuous cooperation between the two countries with “all the transparency” in the case of Italian student Giulio Regeni.

Last week, Shoukry headed to Rome to take part in in the fifth edition of the Mediterranean Dialogues forum on 6-7 December. On Thursday, Shoukry delivered a speech on Egypt’s perspective and its views on several regional and international issues.

The Foreign minister asserted the need to reach political settlements to the crises in the region. When discussing the Palestinian Cause, Shoukry affirmed that any settlement has to include the establishment of a Palestinian independent state.

Shoukry also said that Egypt is keen on promoting new relations and increasing cooperation with its international partners including the US, Russia, and China.