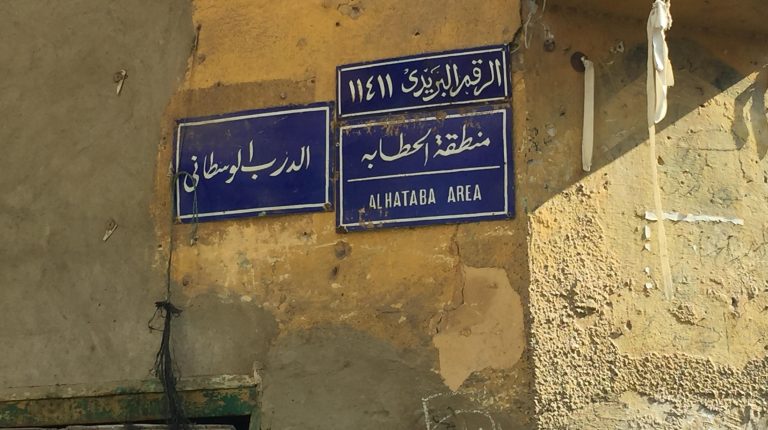 Al-Shurafa mausoleum, a heritage site next to the Citadel in Al-Hattaba Historic Cairo, has been newly discovered by Cairo-based Athar Lina initiative and the Built Environment Collective – Megawra, under the supervision of Ministry of Antiquities and with the support of the American Research Centre in Egypt.

On 30 November, dozens of people including the residents of Al-Hattaba gathered to celebrate the beginning of the conservation work in Al-Shurafa mausoleum in the context of the initiative’s research project (Citizen Participation in Historic Cairo).

Al-Shurafa mausoleum is believed to belong to the Mamluk period, given to its architectural elements, according to the Athar Lina initiative which conducted research and studies to look into the history of the Mausoleum.

Athar Lina is keen on protecting and developing historic sites to make them touristic, without ignoring the people and their role in protecting those places and enrich tourism with their historical crafts with a message of “heritage means people, there is no history without humans.”

The celebration ceremony also included the announcement of a second heritage programme called “Women Quilt for al-Hattaba.” It is a programme that is meant to showcase and enhance the talents of the women working in khiyamiyya (patchwork) in Al-Hattaba neighbourhood.

Other heritage awareness activities for the children were also conducted. “We are working with governmental bodies in a historic neighbourhood and we are keen to establish modalities of citizen participation in heritage conservation based on a vision on heritage as a resource, not a burden,” May Al-Ibrashy, director of both Athar Lina initiative and the Built Environment Collective – Megawra told Daily News Egypt.

On Al-Hattaba neighbourhood and Al-Shurafa mausoleum, Al-Ibrashy revealed that after deep research and detailed studies of the region, they concluded that it has a great potential to be a tourist siteparticularly due to its proximity to the Citadel and given to the historic crafts that are still in practice after all these years.

Al-Ibrashy remarked that the initiative held meetings with representatives of the Ministry of Antiquities, Informal Settlements Development Fund, and the Cairo Governorate office in which they agreed to host a six-day workshop to address the legal situation and the potentials of the neighbourhood.

“We reached a vision to develop the neighbourhood and the Al-Shurafa mausoleum as a heritage and tourist site, but with maintaining its residents in their houses and upgrading their skills to be a part of the developing process,” Al-Ibrashy added. 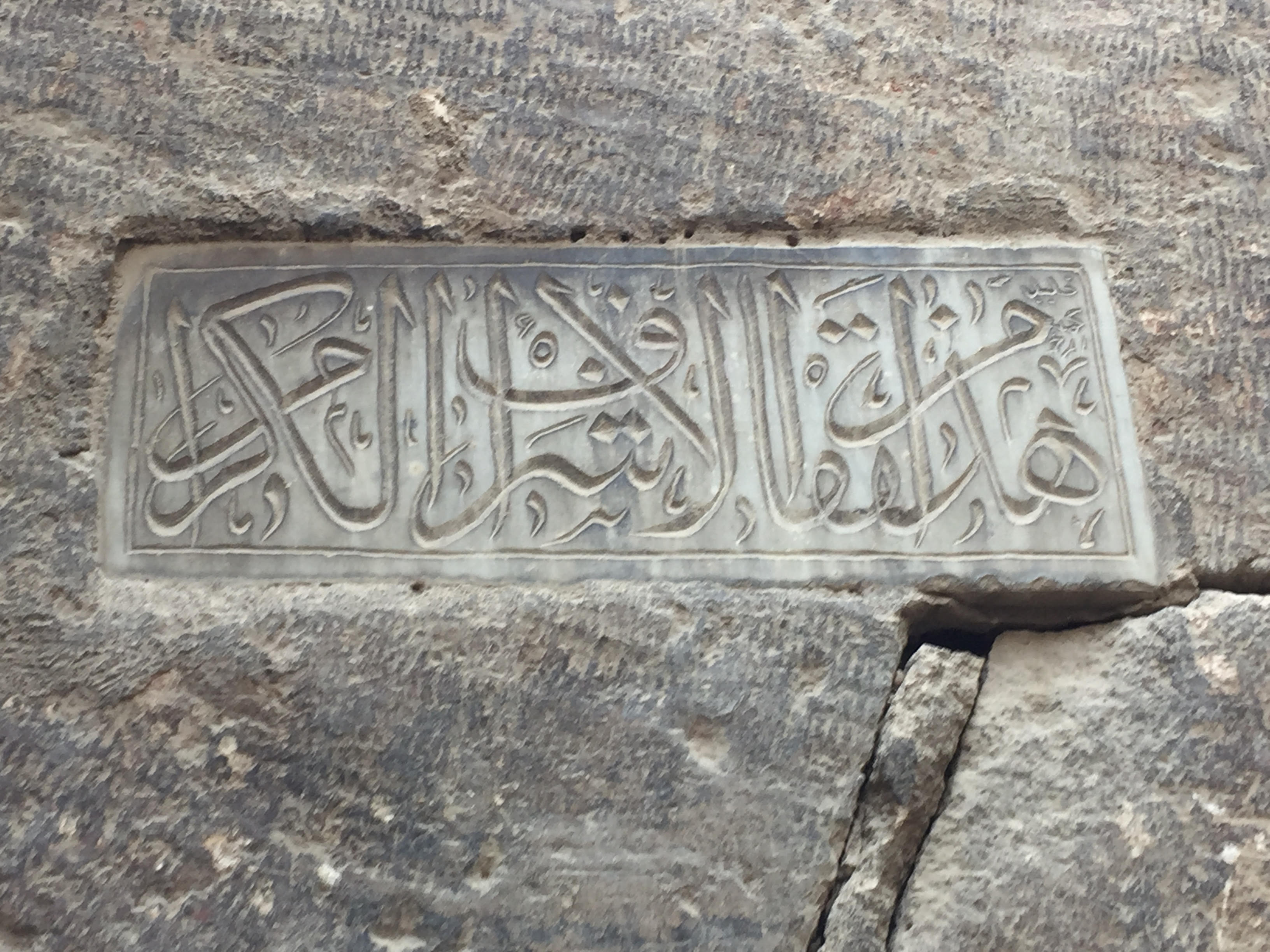 Al-Ibrashy highlighted that the initiative still has long discussions with the Cairo governate office on the Al-Hattaba as it is categorised as informal housing with a second degree of risk. “The area needs developing and rehabilitation, this is very clear and we do not oppose this, but it is not slums. It is a historical and cultural site but with bad conditions which only needs development.”

“The people of Al-Hattaba has been living here since the neighbourhood was built. Their history is part of the history of Al-Hattaba. They do activities that are very important to enrich tourism such as

On Al-Shurafa mausoleum, Al-Ibrashy explained that the building’s huge stone blocks (up to 50 cm high, 100 cm thick and 230 cm long) indicate that it is part of a larger building complex relating to the Citadel. “When we looked in history, we found that this place could be a “sabil building (an ancient Egyptian building with a public fountain), a courthouse or guesthouse.”

Al-Shurafa mausoleum consists of an open-air courtyard leading to a vaulted shrine chamber and a domed ‘sabil room’.

The mausoleum is next to the residents’ houses, who circulated a story over the reason for naming the place as Al-Shurafa.

Saeed Khalifa, a 70-year-old resident from Al-Hattaba told DNE that his father was born in the neighbourhood. “It is our place and here are our roots. Here is my life, I tried to move and live in another area but I could not.”

Saeed noted that they used to hear that seven decent girls were burnt inside the mausoleum, therefore the place is believed to be named “Al-Shurafa”, in reference to the girls.

Women of Al-Hattaba weave their history

The project “Women of Al-Hattaba weave their history”, is a programme prepared by Athar Lina to enhance their skills in khiyamiyya.

The programme consists of a participatory workshop and two public events where the women of Al-Hattaba neighbourhood join a designer to work on a khiyamiyya that tells the history of Al-Hattaba from their perspective, according to the initiative.

The artisans’ khiyamiyya will be hanged in Al-Shurafa Mausoleum after the completion of Athar Lina’s conservation project by the end of 2020.

Heba Negm, an urban researcher at Megawra said that they discovered many crafts in Al-Hattaba, which is characterised by khiyamiyya and sadaf crafts.

The project offers women the chance to enhance their skills and contribute to the development of the Al-Shurafa Mausoleum, Negm added.

Doaa (asked to be presented with her first name only), a 30-year old mother, is a resident of the neighbourhood. She told DNE that they have never expected that their neighbourhood, Al-Hattaba would ever be developed.

“We all here do khiyamiyya that’s used in weddings and funerals. But with the new project, they teach us a new kind of khiyamiyya. We are very glad that someone is taking care of us and is looking to enhance our skills.”

“This will have a great benefit for us and our children. We wish they could also develop the roads and the whole neighbourhood, not only the mausoleum. Any chance to improve our living conditions and our income will be appreciated.”

“I hope my children will be raised in Al-Hattaba to keep their history in their hearts, but I also wish the neighbourhood could improve for their future so they don’t need to leave their home. We hope someone looks into our problems and solves them,” Doaa added.

Meanwhile, Salwa, a 39-year-old woman from the neighbourhood (asked to be presented with her first name only) told DNE that this is the first time she worked in khiyamiyya. “I work at a garment factory. I am glad I am going to learn a new craft; this will benefit the women here.”