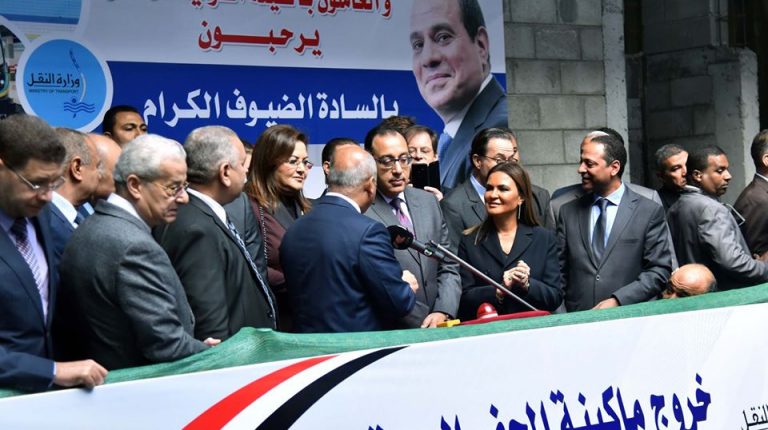 Egypt’s Prime Minister Mostafa Madbouly attended on Sunday the arrival of the deep drilling machine at Maspero Station, with the presence of Minister of Transport Kamel El-Wazir, ministers of planning and investment and international cooperation, the French Ambassador to Egypt, and the Cairo governor.

The Maspero Station is among the stations of the first part of the third stage of the Cairo Metro.

Madbouly asserted the state efforts to upgrade the entire transport sector aims to connect the country in a manner that achieves development and ease the movements of citizens.

For El-Wazir, he said that the third line of the Cairo Metro is a focal point with the first line as they are the oldest lines in the Metro network.

He added that Maspero Station is located on an area of ​​3600 square metres with a depth of 28 metres from the ground level. It consists of three floors with plans to establish a commercial and administrative centre.

The works of the third stage reached 23% which extends from Al-Attaba station to Kit Kat, then the line branches north to the final station at the Rod El-Farag axis, and south to Cairo University with a length of 17.7 km, he said.

El-Wazir noted that the cost of the metro’s third line is about EGP 97bn.

The third stage includes three parts. The first one is from Al-Attaba to Al Kit Kat with a length of 4 km, including Naser, Maspero, Zamalek, and Al Kit Kat. This stage will be inaugurated in December 2021.

The second part is 6 km long from Al Kit Kat to a switch station in Rod El Farag. It includes six stations and will be inaugurated in June 2022.

Earlier in June, the ministry of transport inaugurated three new metro stations in Heliopolis within the scope of the fourth phase of the Cairo Metro Line 3’s development before of the Africa Cup of Nations kicked off. The new metro stations are Haroun El-Rashid, Al-Shams Club, and Alf Maskan.